Kat's Mucha Tattoo, With a Twist of Lemony Snicket

At 31st Street and 7th Avenue, I stopped Kat to ask about her ink.

She was happy to see me and had been wondering, having previously read Tattoosday and knowing she worked in the same area as I did, if our paths would ever cross.

She has seven tattoos (and a cool blog here), but we focused on the large tattoo on her upper right arm:

Or, looking at it as a whole: 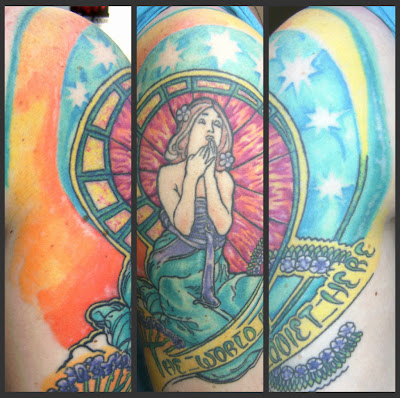 The art is based on the work of Alphonse Mucha, who has inspired a couple of other tattoos appearing previously on Tattoosday here and here.

If that second link looks familiar, it is because both Kat's tattoo and Delissa's are inspired by the same work, "Monaco". 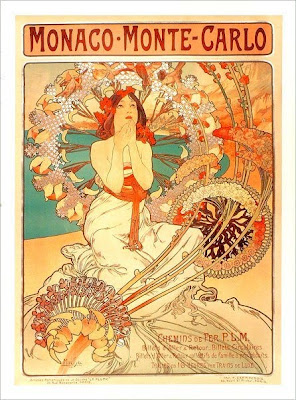 Kat's tattoo is interpreted a little differently, translated with brighter colors, which, in Kat's words, were "amped up to be on my arm".

The plan is eventually for this tattoo to expand to be a half-sleeve.

The phrase "the world is quiet here" is a nod to a motto for a secret organization known as V.F.D. in A Series of Unfortunate Events

by Lemony Snicket. These books are favorites among Kat's list of much-loved titles.

Her work was created by the artist Joy Rumore at Twelve 28 Tattoo in Brooklyn.

Kind thanks to Kat for sharing her work with us here on Tattoosday!
Posted by Tattoosday at 6:50 AM