I met Sherry on Penn Plaza at the end of May and asked her about this tattoo: 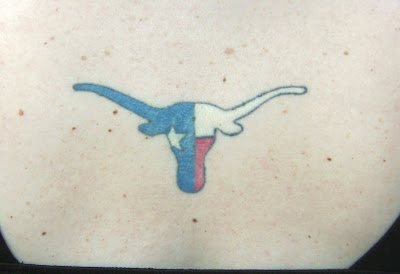 Situated in the center of her back, Sherry's only tattoo merges the Texas longhorn symbol and the Texas state flag and serves as what she calls her "birthmark".

Originally from Texas, Sherry is a New York City resident who loves her tattoo, "especially here in NYC," because she gets "lots of comments on it when I show it off".

The tattoo was inked at a shop in Amarillo, Texas, by an artist she identified as Brian Baker. Alas, my net-scouring skills were unable to illuminate the artist or the shop, so I will assume he has moved on to another location.

Thanks to Sherry for sharing her tattoo with us here on Tattoosday. Feel free to check out her blog here.
Posted by Tattoosday at 1:24 PM