It isn't too often that I chance upon someone inked who knows who I am. So, imagine my surprise when I introduced myself to Pat in Borders, Penn Plaza, and his face lit up with recognition when I handed him a Tattoosday flier.

I had just happened to stop one of the contributing writers from my favorite tattoo blog that isn't my own, Needles & Sins. What with our sites mutually appearing on each other's sidebars, we're practically cyber-related.

So Pat was totally game to pull up a chair with me in the cafe and share a couple of his numerous tattoos that traverse his chest, arms, and legs.

First, on Pat's left shoulder/upper arm is this colorful piece:

This tattoo represents the dichotomy of the good brain versus the bad brain. He wanted something in the New School style of tattooing and Matt Lautar, formerly of Great Southern Tattoo in College Park, Maryland was happy to oblige. Matt is now tattooing out of Marlowe Ink, in Fairfax, Virginia.

For the sake of symmetry and practicality, we then looked at his right shoulder/arm for this take on the Virgin Mary.

Complete with snake and dagger, and burning heart, this amazing tattoo was beautifully inked by Eli Quinters at Smith Street Tattoo Parlour in Brooklyn. The shading and color on Mary's face are just brilliantly done. 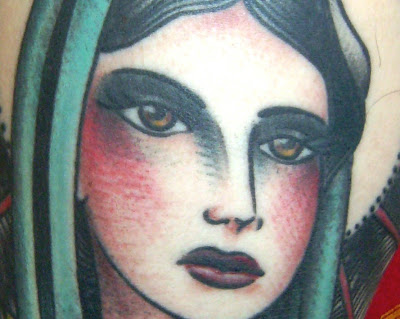 Of course, I had the misfortune to run into Pat as my lunch hour was winding down. With more time, we likely would have talked much longer and documented a few more tattoos.

Pat added later that "I would be remiss if I didn't mention the other tattooers who I've gotten work from:  Dave Wallin has easily done 25-30% of my tattoos. Chest, most of my left arm, a few on the right. I've also been tattooed by Todd Noble, Kelly Krantz, Jake, Andy Perez, Bailey Hunter Robinson and Gene Coffey."

Let's hope we can feature more of this work in the future!
A hearty thanks to Pat for sharing a couple of his tattoos with us here on Tattoosday.

If you haven't yet done so, be sure to check out Needles & Sins. And this link transports you to all that Pat has contributed to their most awesome site.
Posted by Tattoosday at 6:17 AM