I met Lisa recently on the subway platform at West 4th Street.

She had this cool tattoo on her right forearm:

The tattoo, which took four hours to complete, is Lisa's guardian angel. 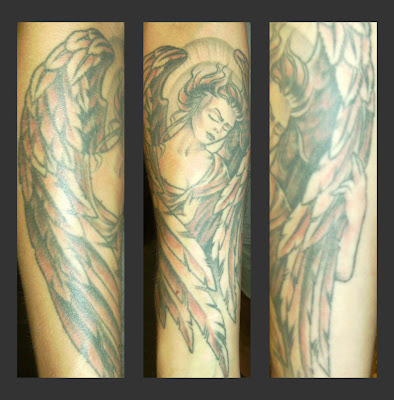 Lisa told me that this is a representation of her guardian angel, a "spiritual guide," although she emphasized that she's not religious.

She had the basic idea for the tattoo and took it to Scott Campbell at Saved Tattoo in Williamsburg, Brooklyn. She pointed out that she absolutely loves the work he did with the shading in the tattoo: 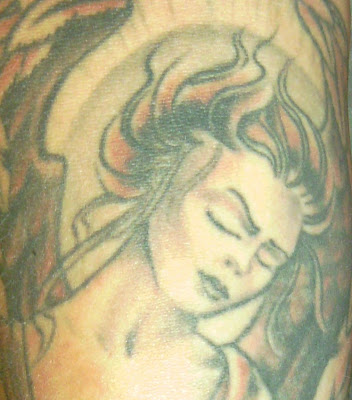 Work from Saved has appeared previously on Tattoosday here. This, however, is the first work we've seen by Scott Campbell in our travels.

Thanks to Lisa for sharing her angelic tattoo with us here on Tattoosday!
Posted by Tattoosday at 6:09 AM

This tattoo is absolutely beautiful. I am in love with it!!! Good eye on the street
http://showusyourskin.com/