When I stopped Kristen at our local grocery store, I did so to ask her about her sleeve, which was coming along nicely.

Kristen recognized the name of the blog and informed me that she was familiar with us here at Tattoosday, because her sister Lauren, and her friend Amanda, have already appeared on the site (click their names to see their work).

So it didn't take much persuading to have Kristin share some of her work and we went with this small piece on her inner right wrist: 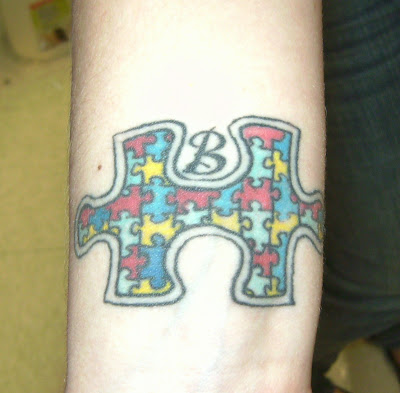 Kristen teaches kids with autism and the puzzle piece is a symbol used to raise autism awareness. Autism Speaks is one organization that raises money to fund autism research that uses the symbol prominently in its literature. 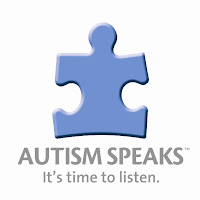 The puzzle piece filled with all the other puzzle pieces is a tribute to all the kids that Kristen has had the pleasure to work with. She added the letter "B" to represent one student named Brian, with whom she has worked for six years. She says he has changed her life through the value of the experience of her teaching him.

As a child of educators, I admire the work that most teachers do, but am in awe of those who commit their lives to helping teach kids with special needs. It's an honor to have Kristen and her tattoo on the site.

The tattoo was inked by Michael Bellamy at Red Rocket Tattoo in Manhattan. Click here to see work from Red Rocket previously featured on Tattoosday, much of which was done by Mr. Bellamy.

Thanks again to Kristen for sharing a piece of her tattoo collection with us here at Tattoosday!
Posted by Tattoosday at 6:18 AM

(: aw I love this! I have a puzzle piece on my foot for autism awareness! but this tattoo is unbelievable. This tattoo is an amazing piece of art work!!

This is an amazing piece (pun intended)! I have been looking for a good puzzle/autism piece for both myself and my husband (he wants gray-scale, I want colour). My search continues, but this was an awesome highlight for me!