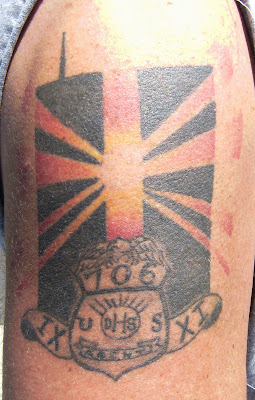 The tattoo is a poignant piece, with the sun shining between the towers. Below is Paul's badge from the Department of Homeland Security, which has evolved into U.S. Immigration and Customs Enforcement (ICE). Particulatly unusual is the depiction of 9/11 in Roman numerals:
IX XI.
I don't believe I had ever seen it represented that way before.
Like the tattoo in the earlier post, this piece was inked by Joe at Brooklyn Ink.

Click here for work from Brooklyn Ink appearing previously on this blog.
Posted by Tattoosday at 12:20 AM