Eric's Tattoo: Zero the Fool and an Obsession with Time

I met Eric on Seventh Avenue between 23rd and 24th Streets earlier this month.

This tarot card on his left forearm jumped out at me:

Eric is a mixed media artist whose website can be seen here. He is an illustrator and is currently in school studying toy design. The tattoo he has is primarily based on a linoleum block he had created that recalls the Tarot card "The Fool". Because it is an unnumbered card in the deck, it is often referred to as "Zero" or 0.

The Fool often represents the beginning of a journey, oftentimes a "foolish adventure". He had this tattooed to commemorate his decision to move from Boston to New York City. While the decision may not have been foolish, it did mark a new journey in Eric's life.

The card was tattooed by Hannah at Regeneration Tattoo in Boston.

One may have noticed that there is work around the tarot card, as well, so it's only fair to show the piece as a whole: 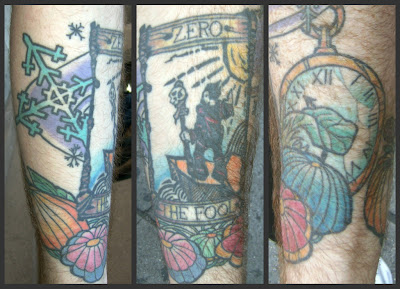 And the tattoo extends up the arm a bit from the pocket watch on the right:

The additional elements in the tattoo speak to Eric's obsession with the passage of the time. Snowflakes are only temporary as they fall from the sky and melt, or become mixed with other flakes and lose their singularity.

The flowers are imagined creations representing growth. Eric's floral images are inspired by the artwork of Henry Darger. 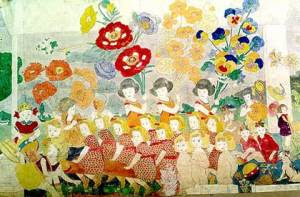 He also notes that the time piece is cracked and broken: 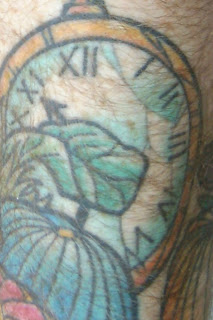 This, he says, represents the fight against the obsession and paranoia over the passage of time.

The work around the tarot card was all tattooed by Kelly Krantz at the now-defunct Hold Fast Tattoo in Williamsburg, Brooklyn. From what I can tell, Krantz is not currently affiliated with any one tattoo shop.

Thanks to Eric for sharing his thought-provoking tattoo with us here on Tattoosday!
Posted by Tattoosday at 7:50 AM