I met Joe last month outside of Penn Station and he shared two tattoos with us.

First is this hellcat: 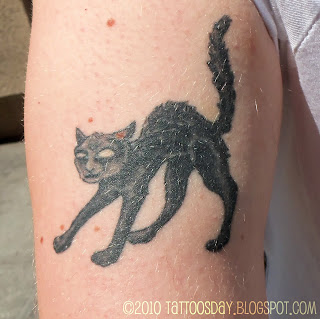 Why this cat? It's a design, Joe says, inspired by the band Rancid, whose music appears on Hellcat Records.

Not to mention, he likes cats. Need he have more reasons? That's on his upper left arm.

I'm more excited to share this photo, which actually is a rare Tattoosday shot in which one can see the contributor's face. I could have cropped it out, but I think it's a cool shot. 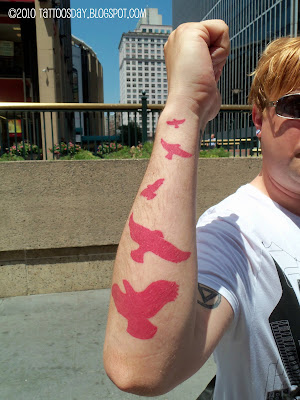 This tattoo arose out of Joe's desire to have some body art made with red ink. The design is based on the album art for a disbanded musical act out of Washington called Isa.

The two tattoos are among five Joe has in total and were done by Milton Sillas at Tattoo Royale in the Pacific Beach section of  San Diego, California.

Thanks to Joe for sharing his ink with us here on Tattoosday and for waiting so patiently for me to get to his tattoos. The summer backlog is both a bane and a blessing.

As a postscript, readers familiar with the site will notice that I've watermarked these photos. I've grown tired of seeing Tattoosday content appropriated elsewhere on the web, without attribution. This is an attempt to maintain credit of our content here at Tattoosday.
Posted by Tattoosday at 7:18 AM