While my kids were bouncing around in the Moon Bounce-a-rama, a woman named Helen approached and her child joined my girls in their attempts to defy gravity.

Helen had this awesome tattoo on her right arm: 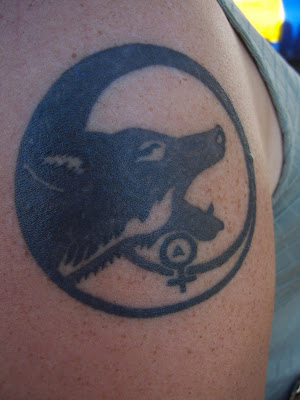 Helen explained it: The wolf, combined with the female symbol, and the letter A, or alpha, combined to represent that she is the alpha female in her family.

She had this tattoo done by the artist Dan Brown at the Mad Hatter's Tea Party, a tattoo and arts convention in Maine.

The wolf was inspired by a woodcutting. She added the symbols for the alpha female. Her husband was the alpha male, but he sadly passed away six years ago.

I then asked about her left arm, which had the following piece: 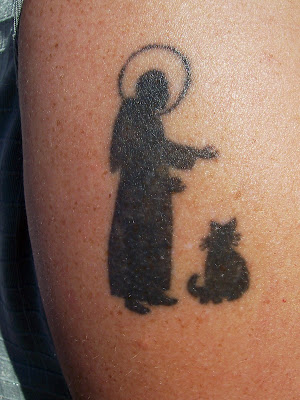 This is St. Francis, patron saint of the animals. The cat is present because Helen rescues cats, and currently has ten (10!) living with her. She credited Lynn Dulaney as the artists of this tattoo, also done at the Mad Hatter's Tea party. In fact, she advised me, all of her work gets done at Mad Hatter's.

I must have raised my eyebrows, as Helen appeared to have only these two tattoos. She revealed that she had 11 tattoos in all, not typical for a school teacher from Queens. These two were the only ones visible, and, had she been wearing a shirt other than a sleeveless one, you'd have thought she looked the part of a tattoo-less educator. She acknowledged that some times its best not to be seen as having tattoos by the students and/or parents. Although if one of my kids' teachers had tattoos, the family would think it was cool.

Thanks to Helen for talking with me and sharing her tattoo stories here on Tattoosday!

Update: After Helen posted her comment below, I updated Lynn's name with the correct spelling and linked her page at Moving Pictures Studio, in Wooster, Ohio. Also, I thought it would be nice to link the page from the New York Times "Portraits of Grief" with the blurb Helen's husband Liam. Helen, if you do not wish to have me link this, please let me know and I will remove it. Liam's brief portrait is at the bottom of the page and rolls over to the next.
Posted by Tattoosday at 7:02 AM

Thank you for such a nice piece on my work! Nice meeting you. And I think what you are doing is very cool.

Just in case anyone wants her work Lynn Dulaney works out of Ohio. And for the record, Liam, my husband, actually died 6 years, at 9/11. i actually have a Daffy Duck, his favorite character, tattoo in his memory.