At the beginning of the week, Summer was still clinging to the Northeast, which meant that there were still tattoos to be spotted out in the sunshine.

Monday afternoon, I noticed a woman in the plaza outside of Borders with a cool ring of flames and a lion tattooed around her ankle.

When I approached her about it, she was kind of down on the piece, saying the guy who did it out in Huntington, NY overcharged her and messed it up. It still looked pretty cool to me.

She also showed me her first tattoo, a star in a circle, on her lower back.

However, the third tattoo, which I hadn't seen until she pushed her hair back from her neck, was her favorite. That was the one she liked the best: 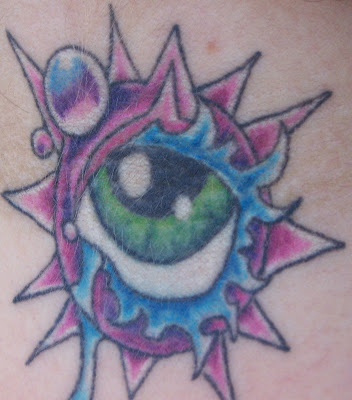 She gave her name as "Marla," which she acknowledged wasn't her real name. She slipped later and said what her real name was, but I will honor her desire to be anonymously misidentified.

Marla had her piece inked by Cheryl at Ink Alternative in Ronkonkoma, NY. She spoke nothing but praise about the shop. Marla was thrilled to not only let me photograph her tattoo, but was excited when I showed it back to her on my camera as she hadn't seen it in a while.

Marla said she had the tattoo done after getting through a hard time and that it represented "a new awakening". The symbolism of the sun and the tears represented the moving on from the difficulty she had just gone through.

Thanks to Marla for sharing this cool design with the Tattoosday community! Thanks also to Stacey Sharp, another artist at Ink Alternative, for identifying for me the artist who inked Marla's neck.