In the continuing story of my Third Avenue Festival Tattoo scavenger hunt, we have a piece from the much-tattooed Kimmy, aka Lolita Ford, who passed me at the corner of 93rd and 3rd and, when I stopped her to ask her about her tattoos, was very friendly. Lolita is the blonde, second from the right, in the photo below, from her MySpace page. 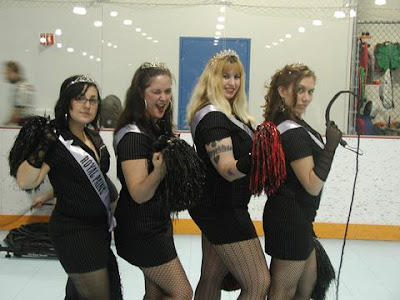 She had much ink (13 tats in all) and like those folks that have a plethora of tattoos, I asked her what particular piece meant the most to her.

She had a friend pull down the back of her shirt to reveal the following small tattoo below her neck: 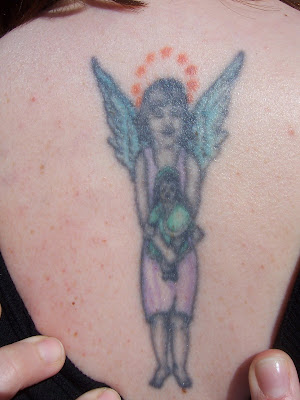 Kimmy explained that this tattoo was inked about ten years ago in honor of her grandmother, who had recently passed away. Her grandma had a china doll collection and, upon her passing, left all of her dolls to various members of the family. Kimmy received one doll, which she cherishes to this day. The tattoo represents her grandmother as a guardian angel, holding the china doll that she passed on to her.

Lolita Ford is head "jeerleader" of the Gotham Girls Roller Derby and is captain of the Royal Pains Jeerleaders who are allied with the team, the Queens of Pain.

This particular tattoo was inked in Pittsburgh, at Inka Dinka Doo. The artist was Tony Urbanek.

Thanks to Kimmy, aka Lolita, for sharing this tattoo with me and the Tattoosday community.

Posted by Tattoosday at 5:59 AM