The next piece featured here is a first for Tattoosday: a tattoo that its owner no longer wants.

I spotted this nifty tattoo on the back of the neck of Vicki at our local Rite-Aid store: 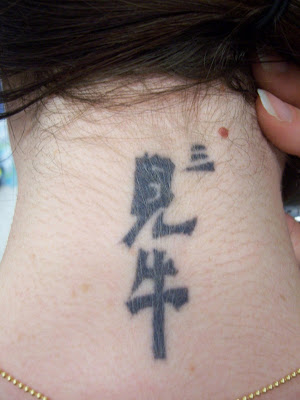 When I first approached her, she thought I was going to give her information on tattoo removal.

Vicki got this piece about 7 years ago when she was 20, at Butch's Tattoo Studio in Keyport, NJ.

She indicated that the symbols were part of a cartoon in a philosophy book and represented "the path to enlightenment". Vicki, however, stated that she is a Christian and has come to dislike the tattoo to the point of wanting to have it removed. It doesn't mean anything to her anymore.

She added that she probably would have started the process, but for the cost.

I mentioned to her the story of Tracy's tattoo, and suggested that she check with different tattoo artists to see if they would be able to design and ink a cover-up piece. That would be a) cheaper and b) more meaningful if a cover up could be designed to more accurately reflect who she is today. She nodded and said she had considered that, as the bottom of the symbols closely resembled a cross.

I was initially surprised that Vicki was willing to participate, considering how she felt about the tattoo, but she was a great sport about it and I wish her the best of luck with the piece, whether it be removal or transformation.

I know that some artists don't like to do cover ups as a professional and/or artistic courtesy, but that is in my opinion a better option and, from what I've heard, a cheaper and less painful one as well.

Here are some other Buddhism-inspired tattoos.

Thanks Vicki, I truly appreciated your contribution to Tattoosday!

p.s. On an unrelated, yet similar note, read what Charlie Sheen is considering doing with his 13 tattoos here.
Posted by Tattoosday at 12:34 AM