Last week, in front of Madison Square Garden, I met a guy named Mike who had several tattoos.

I have found the most success with people in this area because, generally, people are loitering in the fresh air while waiting to head into Penn Station and catch a train.

That's what Mike was doing and I must give him kudos not only for being open to talking with me, but for proudly showing me all of his tattoos (5 in all) and for being forthcoming about his life, more than others may have been.

This is the tattoo that first drew my attention: 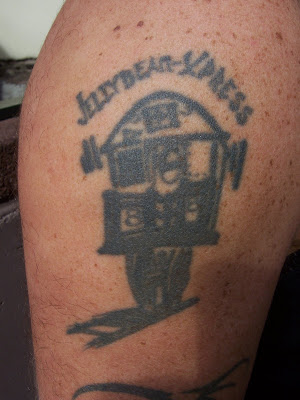 This piece was designed and inked by an artist in Miami at a shop called Art Attack, which is now known as Merlin's Tattoo.

Mike's ex-fiancee's pet name was "Jellybean," because, he said, "she was sweet". The name was merged with the express train logo by the artist.

Mike was a first for Tattoosday, as when I asked him what shop his tattoos came from, he hesitated briefly, but then stated matter-of-factly, "State Penitentiary".

So, four of his tattoos were credited to an incarcerated artist named "Kenny V." I must say, in my opinion, considering that these were not done in a shop, per se, the work is superb.

Below the "Jellybean Express" tattoo on his right arm, there was this dragon (because he likes dragons): 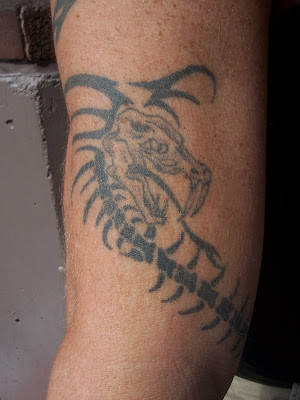 What was particularly cool about this dragon was that its rudimentary spine-like body wrapped around Mike's arm from the biceps down toward the wrist. It's hard to really capture the effect, but I did the best that I could. 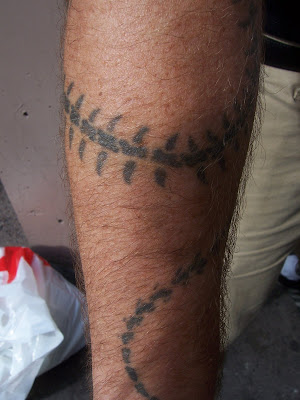 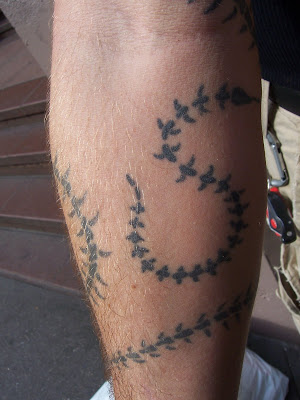 On his left arm he had two tattoos. A wolf: 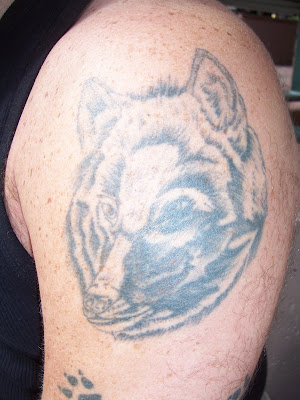 and below the wolf was a row of paw prints, wrapping around his arm. Each paw print, Mike said, was a tribute to a friend in the penitentiary. 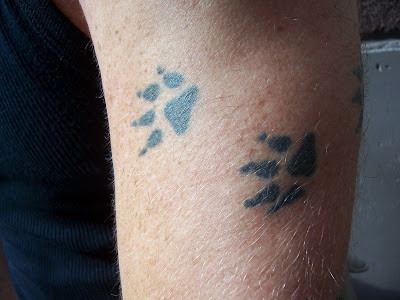 Lastly, on his right calf, Mike had this intricate ace of spades with a skull inside of it: 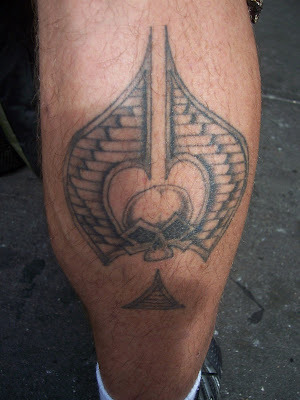 Thanks to Mike for sharing his tattoos and helping display them here for Tattoosday.
Posted by Tattoosday at 6:01 AM