Walking down 7th Avenue on Friday, October 19, I spotted a sleeved arm approaching, Sorry, it was a couple. Man and a woman, young, in their mid to late 20's...(apologies if you are reading this and are younger).

Behold, the guy was game for talking tattoos. In fact, Jörgen Wiklund, visiting from Sweden, was extremely cool and patiently indulged me as I tried to write down names in his native tongue.

Jörgen wasn't sure how many tattoos he had...he guessed around 15 or so. I snapped two. First, since we are in New York City, this seemed apropos: 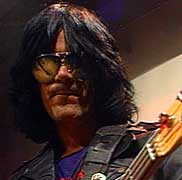 Jörgen characterized all his tattoos as whimsical, fun, spur of the moment decisions. This is a tattoo representing Dee Dee Ramone, as a duck. He elaborated that his girlfriend had a duck-like haircut and earned the nickname "Ducky," so this piece was a tribute to her.

The Ducky Ramone was inked at Evil Eye Tattoo in Stockholm.

Jörgen also let me take a picture of this interesting piece, which he says is an homage to the musician Roky Erickson: 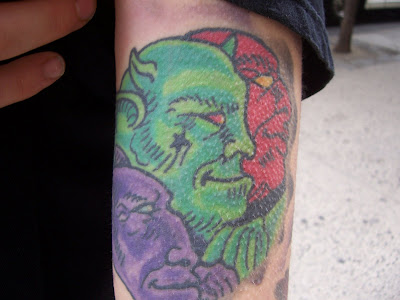 It took some searching, but this tattoo is based on what I'm guessing is an out-of-print or special edition cover of Roky Erickson and the Aliens CD I Dream of Demons : 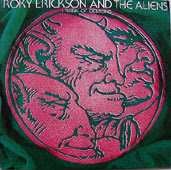 When I asked who Roky Erickson was, thinking he was perhaps a Swedish musician, he enlightened me, saying he was from Texas and that he was "the greatest musician that ever lived."

When he asked if I had heard of the 13th Floor Elevators, I said sure (one song on my BilliPod, "You're Gonna Miss Me," from the High Fidelity soundtrack. You can hear the song here, streaming on Erickson's website.

The whole demon motif ties into the storied history of Erickson and his past with drug use, electro-shock therapy, and mental illness.

Jörgen had this tattoo done in his home town of Härnösand, in northern Sweden, at a shop called Paul's Custom Tattooing.

Jörgen was a real treat to meet. He and his girlfriend (who is tattoo-less) are/were in town for a week. I suggested she get her first tattoo in New York to commemorate her trip here. The were both good sports and I want to thank Jörgen and his significant other for their participation in Tattoosday and the contribution of the first international contribution to the blog.
Posted by Tattoosday at 5:59 AM