Last Friday, I featured a tattoo from one of two women I met in Penn Station.

They both are part of a group called Inked Up Angels.

I had first taken the photo of the tattoo belonging to "Pink", and now it was her friend's turn.

I looked to Kat curiously, wondering what tattoo she was going to offer for Tattoosday.

We were standing in a corner of busy Penn Station near the subway turnstiles and she told me I needed to move. We switched spots, so that I was standing in the corner and she was between me and the crowds. Her friend Pink stood behind her and shielded Kat from the throngs of commuters. I got that she was going to show me something quite revealing, yet I had no clue what it was.

With her left side facing me, Kat hiked up her skirt to reveal this absolutely incredible piece, that ran from the upper part of her thigh, to above her waistline: 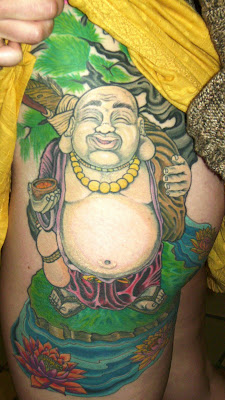 That's about eighteen hours of work, folks, and it's an amazing piece. Kat had it tattooed because she is a Buddhist and loves loves the spirituality of Buddha. 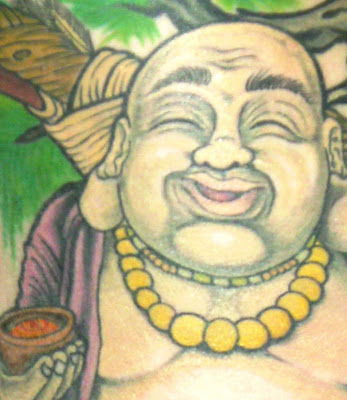 The detail that went into this tattoo and the vibrancy of the color is phenomenal. Take a closer loom at the lotus at the bottom of the tattoo: 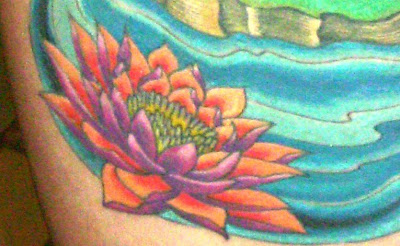 Equally incredible is the detailed line work, as is evidence in the eyebrows and the leaves of the tree in the background: 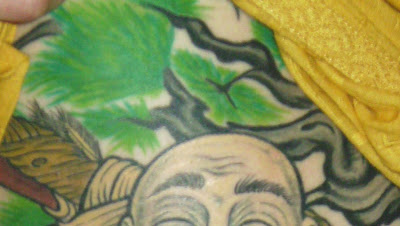 This amazing tattoo was inked by Dez Mooney at The White Lotus Tattoo & Art Gallery in Toms River.

This is definitely one of my favorite tattoos that I have seen in nearly two years of Tattoosday posts.

I want to thank Kat for sharing her amazing work with us here at Tattoosday.

If you head over to the Inked Up Angels MySpace Page, you can not only see more of Kat's tattoos (including shots of the Buddha in progress), but you can catch glimpses of some additional work on a number of other tattooed women.
Posted by Tattoosday at 5:36 AM