On April 28th, I was walking across Penn Plaza, outside of Madison Square Garden, and saw a couple of guys taking pictures.

This is fairly common outside of "the world's most famous arena".

Depending on the event going on that day or night, one can get an eyefull of tattoo ink. When there is a rock concert scheduled, there is quite a few visible tattoos on the plaza, when the Westminster dog show's in town, not so much.

On this particular day, there was a WWE wrestling event at the Garden, and the guys I saw taking pictures were waiting for the show to begin.

I approached and met Adam, who had this very cool tattoo on his right bicep: 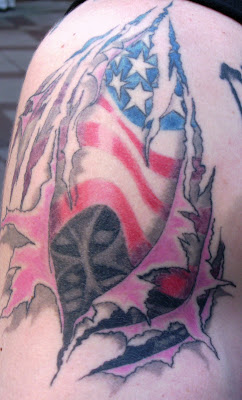 The piece is designed to flow with his musculature and falls under what I call the "torn flesh" category of tattooing. That is, the tattoo takes on an additional dimension, as it is inked to appear as if the flesh is ripped away, allowing the viewer to see what lies below the skin.

In Adam's case, he bleeds red, white and blue in the form of the American flag. His patriotism is exemplified by this tattoo. As a member of the United States Air Force, he serves our country proudly, and his tattoo is a symbol of how his love of our country runs deep.

Adam also wanted to show me his back piece, a religious-themed work that reflects his faith: 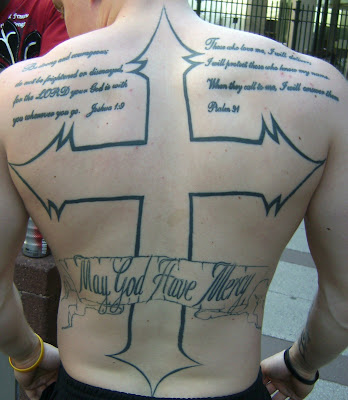 The cross takes up most of the space, and is anchored by a banner that proclaims "May God Have Mercy".

There are also two biblical verses on either side of the cross at the top of the back.

The left is from the book of Joshua, Chapter 1, Verse 9 (New Revised Standard Version):

"Be strong and courageous; do not be frightened or dismayed, for the LORD your God is with you wherever you go."

"Those who love me, I will deliver; I will protect those who know my name. When they call to me, I will answer them..."

All the work shown here on Adam was inked by Adrian at Ken's Underground in Dover, Delaware.

Thanks to Adam for sharing his awesome tattoos with us here on Tattoosday!
Posted by Tattoosday at 5:54 AM