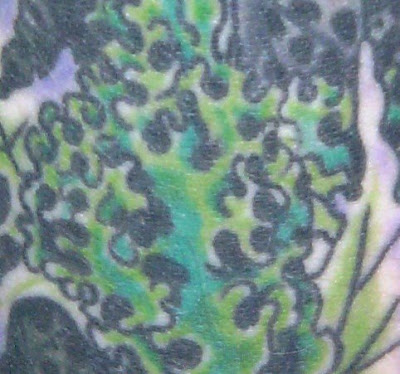 I met Milo at Trader Joe's in Brooklyn on the first Saturday in May. Working the door as a greeter, Milo's tattoos were peeking out from under a shirt sleeve so I couldn't help but stop to chat. Twenty minutes later, when Milo was on break and my groceries were bought, we continued our conversation.

This tattoo is actually a series of family-themed pieces that make up what is currently a quarter-sleeve. The work to date has been completed over the course of two years by Myles Karr at Saved Tattoo in Brooklyn. Myles is now co-owner of Three Kings Tattoo in Williamsburg, Brooklyn.

Each element is a tribute to, and/or inspired by, members of Milo's family.

I generally shy away from larger pieces that circumvent the limbs, but each part, in and of itself, as fascinating.

For example, Milo's grandfather was a doctor and a skier, which is represented by a stethoscope and crossed skis.

Milo's grandmother was a musician and the instrument on the inner part of the bicep is a scaled-down representation of her double bass. 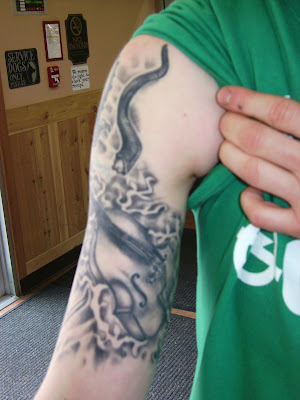 What I originally took for severed octopus arms dripping colorful blood, upon closer examination, and a gentle explanation from Milo, was revealed to be shofars (ram's horns). These are traditional instruments that are sounded on Rosh Hashanah, the Jewish New Year, to welcome the arrival of another year. They are included in this mix of symbols as a tribute to the
Jewish heritage of Milo's father and paternal grandmother.

The lines of color exuding from tubes of paint nestled in the shofars are a nod to the same two forebears, who were artists.

The top of the tattoo, which features a baby eagle and a crown, represents Milo's paternal family crest. 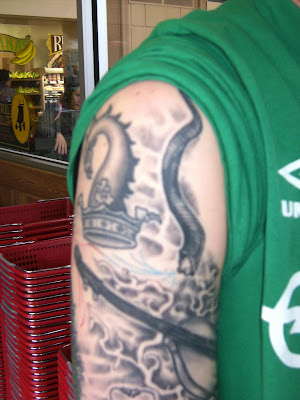 And finally, on the back side of the bicep, these leaves pop out in a brilliant explosion of greens:

Tattooed are three different types of kale: your basic everyday kale, dinosaur kale and Tuscan flatleaf. Milo explained that, growing up, food culture dominated the home. It was integral to the family and the kale not only pays tribute to family, but reminds Milo to eat right. It seemed
fitting to find a kale-themed tattoo at Trader Joe's, one of my favorite grocery stores, and a standard for healthy food.

I want to thank Milo for taking the time to tell me about the numerous tattoos that seemed so personal, yet universal for so many. We here at Tattoosday loved the uniqueness of Milo's ink.

Check out this other piece, also by Myles Karr at Saved Tattoo, which appeared last May on Tattoosday.
Posted by Tattoosday at 6:00 AM