With the Tattooed Poets Series under way last month, I was a bit remiss in posting about the "regular" tattoo encounters.

With apologies to the following volunteer, I am presenting some amazing work on a gentleman named Ben, who I spotted back on April 2 while walking through Penn Station.

Ben was wearing a short-sleeve shirt and had tattoos covering his arms. When I approached him and explained Tattoosday, he enthusiastically agreed to participate. In fact, he removed his shirt to reveal an incredible back piece: 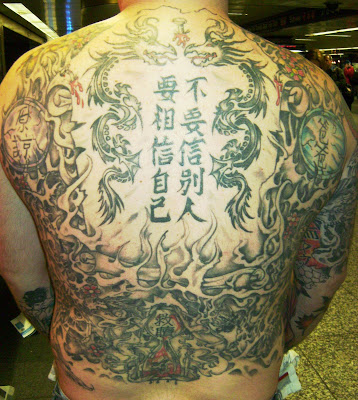 The one problem with featuring huge tattoos like this is not getting all the details in. What follows are some of the finer points of the tattoo.

At the bottom of the back is an hourglass design, within which is, Ben said, kanji representing the word "redemption": 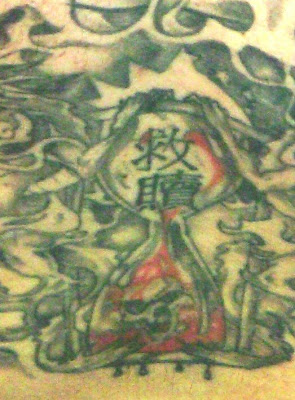 The piece represents that he has "only so much time to redeem himself".

The main set of Chinese text in the center of the back was loosely translated by Ben as "I have trust in no man except for the trust I save for myself": 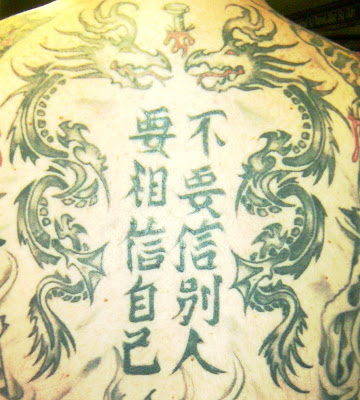 Also of note on the back are the two kanji representing "father" (the right side) and "forgive me" (the left side). These characters are in disks on either side at the top of the back.

The back was done by an artist no longer practicing at Skin Deep Tattoo on Long Island.

Imagine busy Penn Station, a guy standing there talking to a bespectacled blogger, camera in hand, beholding a subject covered in ink. Where to even begin?

It's like taking someone to the world's largest buffet and telling them they can only fill one small plate with food.

The back as a whole was impressive, but Ben was willing to share more, and we settled on this view, with a dragon and a geisha: 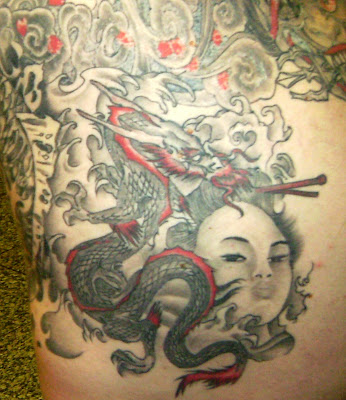 Ben credits this part of his body's tapestry to an artist named Loco working out of Dharma Tattoo in Miami Springs, Florida.

Thanks to Ben for sharing his amazing tattoos with us here on Tattoosday!
Posted by Tattoosday at 5:50 AM