Grover's Tattoos Recollect the Past, But Focus on the Future

I ran into Grover a month or two ago where he worked in Penn Station and admired the work on his sleeve. As I try my best to not disrupt folks on the job, I passed him a Tattoosday card and was happy to see when he e-mailed me a few days later.

Our schedules are different, and we tabled any definitive date to meet and discuss his ink. But one day, by chance, I passed the business where he worked and he was outside on a break.

And he offered me his arm:

We discussed the inner part of his right forearm first. This cross is a tribute to his parents, who were both injured in a serious accident about five years ago. He had this tattooed after it appeared that they would recover, and it symbolizes his faith in the blessing of their survival. The tattoo reads "Mom. Dad. God Bless."

On the top part of the outer right forearm is an starred banner design and the words "Death Before Dishonor" to remind him that he has kept his head up while working hard for his daughter. 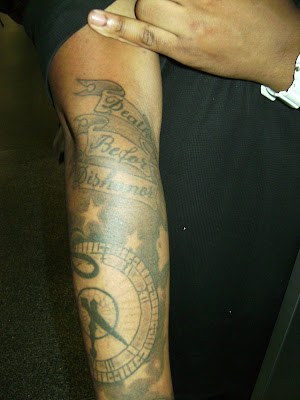 He has chosen the honest life, rather than slip into the easy trap of making a living dishonorably.

Grover's daughter's name is London, which he has inscribed on his flesh, over a tattoo of Big Ben, the emblematic clock tower than stands proudly in the city which lends its name to his daughter. Big Ben is frozen in time at 4:10, the date (April 10) that London was born. 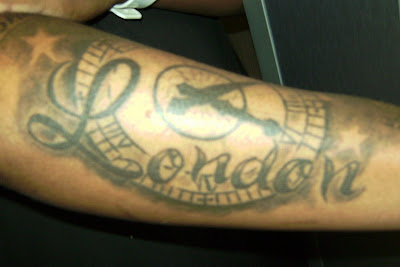 Below that is a skull crying blood. 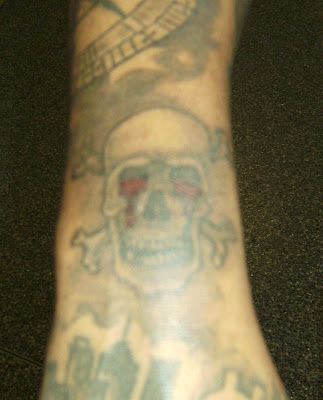 The blood is the only part of Grover's tattoos that are not done in black ink. This image reflects the harsh reality of the world and the raw emotion that life often pulls out of one's soul, in the form of bloody tears.

And lastly is my favorite part of the tattoo, which rests on Grover's hand. 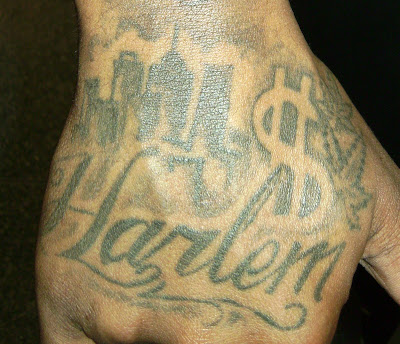 He grew up in Harlem and the buildings represent the view south, looking to the skyline of the city. The dollar sign and, to the right, the leaves of marijuana plants, represent to Grover what it was like "back in the day," when the drive for money in the big city, and the prevalence of marijuana in the neighborhood, left a profound impact on his days growing up.

Grover credits much of the work seen here to an artist named Marco, who works out of Crazy Fantasy Tattoo on West 4th Street in Manhattan.

I want to thank Grover for sharing his set of tattoos with us here on Tattoosday!
Posted by Tattoosday at 5:56 AM