I've always said that Tattoosday is 50% about the tattoos and 50% about finding them. But once in a while, tattoos just present themselves and I can't contain myself.

Ashley is a case in point. She was at the laundromat the same time as I was, and she had two small tattoos inked on her feet. Out on the street, I likely would have let her walk by without stopping her, but there, as we stood around waiting for clothes to wash and dry themselves, it struck me as negligent NOT to ask her about the tattoos.

Ashley has three tattoos in all. The first one I noticed was this peace sign on her right foot: 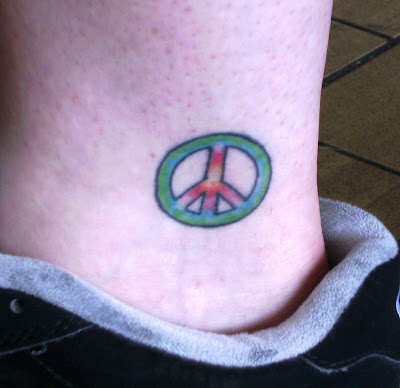 It's a popular symbol, of course, and not simply because of what it stands for, but for the aesthetics of the shape.

Similarly, she has a small heart on her left foot: 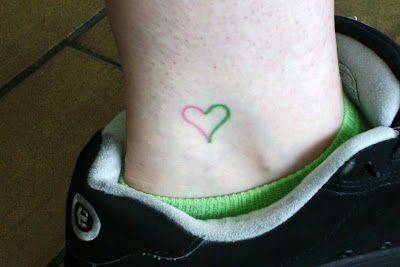 What's interesting to me about this simple tattoo is the duality of the colors. Ashley says that the colors represent the "two polar sides" of her personality - the "mellow" green and the more exciting pink.

Both tattoos were done in the same sitting by an artist named Taz.

Ashley has a third tattoo, her first, which she was kind enough to share with me: 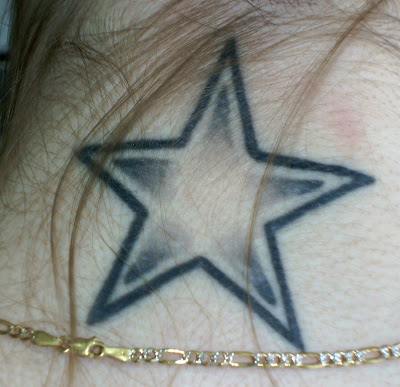 This star was inked by Joe at Studio Enigma (whose work has appeared previously on Tattoosday here). This is purely decorative, at the base of her neck, and she had it done with a close friend, who had the same design inked on her shoulder blade.

Thanks to Ashley for sharing these tattoos with us here on Tattoosday!
Posted by Tattoosday at 7:42 AM