Earlier this month, I met Gina in Manhattan at the corner of 31st Street and 7th Avenue and I asked her about these tattoos: 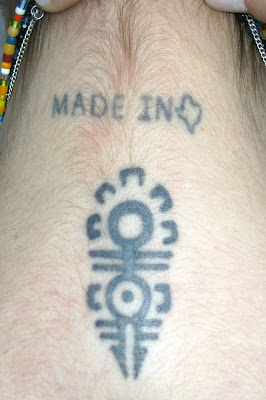 The main element is a the piece she had inked in January 2007, on a trip to Mexico.

She went on a cruise to Mexico with her mother. While exploring some Mayan ruins, she made a rubbing of the design above, which bears some relationship to Xul, a canine god in the Mayan pantheon. She took the rubbing to a local tattoo artist and had it inked while in Mexico.

I questioned her about the cleanliness of a tattoo shop south of the border and she maintained that the place was immaculate, much cleaner than some of the shops she has seen in the U.S.

Just above the Mayan piece is a smaller tattoo, featuring an outline of Texas, where she was born. When her mother saw this "Made in Texas" tattoo, she asked Gina, "What makes you so sure you were made here?" Clearly a woman with a sense of humor. But, Gina noted, the remark "made [her] throw up a little".

This small tattoo was done by Homer Saenz at 713 Tattoo Parlour in Houston. Work from 713 has appeared previously on Tattoosday here.

Finally, as a matter of habit, I always ask people how many tattoos they have. Gina gave me an unusual answer, "Nine, going on seven."

When I gave her a puzzled look, she explained that she has nine tattoos, but she is planning on having two removed. As an actress, she feels that two of the more visible pieces may prevent her from attaining roles.

Thanks to Gina for sharing her tattoos with us here on Tattoosday!
Posted by Tattoosday at 5:50 AM

You have a nice blog, tattoo art and beautiful.
please visit my tattoo blog tattoo design
and tattoo flash design