There are certain signs I look for when I am scanning a crowd for tattoos. Colored hair and/or facial piercings are good, but not always reliable, indicators that someone may be inked. A guitar case, you would think, also favors the theory that its possessor has tattoos, but it's not always the reality.

So when I spotted a tall woman walking out of Penn Station carrying what appeared to be a guitar case, I took notice. And, she had a neck tattoo that resembled this pattern:

Despite being in a hurry, she let me shoot this photo of her forearm tattoos: 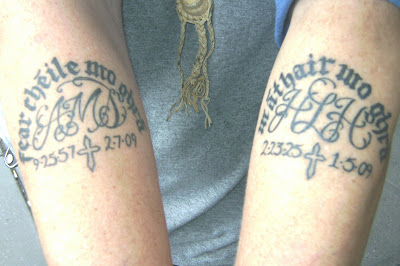 She explained that the one on the left arm features her mother's initials (HLH) under the phrase "máthair mo ghrá" and the dates 2-23-25 - 1-5-09". The tattoo is Gaelic and translates to "Mother, my love".

In an attempt to express condolences, I said, "Wow, it sounds like you've had a bad year. I'm very sorry".

But she was not down about it and said that actually, despite a rough year from a family perspective, it had been a good year for her personally.

She indicated that she was running late for rehearsal and I asked her if her band had a website. She started to spell the name "L-E-Z..." and I knew instantly what band she was in. The runic tattoo on her neck was familiar because it had stood for the great drummer John Bonham. Leesa is the drummer for the all-female Led Zeppelin tribute band, Lez Zeppelin.

It was only later, after researching a bit, that I learned that the band's guitarist and de facto leader Steph Paynes, had announced on January 5, 2009, that the other members of the band were leaving, and three replacements, including Leesa, were subsequently selected.

I am assuming that Leesa's reference to a good year, personally, had much to do with her joining Lez Zeppelin, and embarking on a tour.

These memorial tattoos were inked by Matt Adams at Sacred Tattoo in Manhattan.

Here's a clip from the band playing earlier this year in New York:

Thanks to Leesa for stopping and talking with me, despite being in a rush. I appreciate her sharing her memorial tattoos with us here on Tattoosday!

Please check out the Lez Zeppelin website (here) to learn more about this cool band. See here where they are playing later this summer.
Posted by Tattoosday at 6:15 AM

Thanks, Bill, for telling my story. Matt and the guys at Sacred were very pleased to see their shop being talked about. Also, thanks for plugging the band. You definetly have something going here with your site and i hope you keep it up!!