I met Dominic a couple of weeks ago out in front of Madison Square Garden in Penn Plaza.

He was visiting from Cologne, Germany, and was displaying an arm with tattoos:

Dominic has seven tattoos, most of which are based on traditional flash art.

We looked specifically at his gypsy tattoo, which Dominic says is especially poignant: 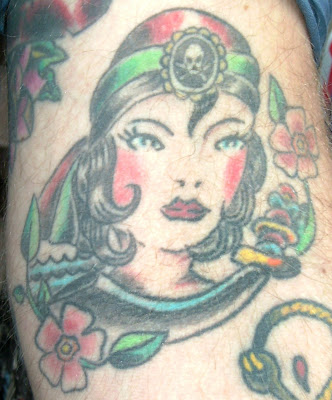 Why is this piece so meaningful? Dominic says his family once was very well-off ("blue-blooded"), but they lost their fortune. As a result, he feels a certain kinship to the tattoo.

The tattoo was created by Carlos at Fine Line Tattooing in Düsseldorf, Germany.

Thanks to Dominic for sharing his gypsy with us here on Tattoosday!
Posted by Tattoosday at 7:09 AM