Last Friday I received a very special surprise via e-mail from a guy named Josh: 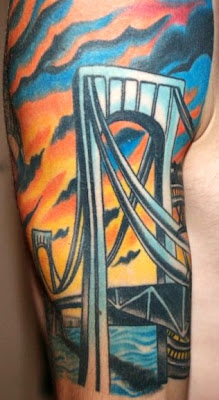 The following explanation accompanied the photo:

I'm also a big enough fan of the bridge to get it inked on my skin ... Although mine is a slightly different style than the other two you posted.
I'm originally from New Jersey, and used to drive over the bridge on a regular basis to my Army duties at Fort Hamilton ... I also wanted to run in the NYC Marathon for many years growing up, and finally did so in 2004 (and again in 2006) and decided to commemorate the occasion with a little inking."

Needless to say, it's a phenomenal piece. I, too, am partial to the Verrazano-Narrows Bridge, as I can turn my head to the left as I type this at my computer, and see it through my window.

Josh had the tattoo done by an artist named Mark Van Ness at Blue Flame Tattoo in Raleigh, North Carolina. Work from Blue Flame has appeared twice before on Tattoosday.

Josh elaborated on the piece in a follow-up e-mail:

"...I was inspired by the works of artist Barbara Bascove, who's painted dozens of New York City landmarks in her unique style. I loved the dark, rich tones of her paintings, and decided to get my tattoo along the same lines. I used the same angle / template from one of her paintings of the George Washington Bridge, and just had the tattoo artist replace the GW towers with those of the Verrazano." 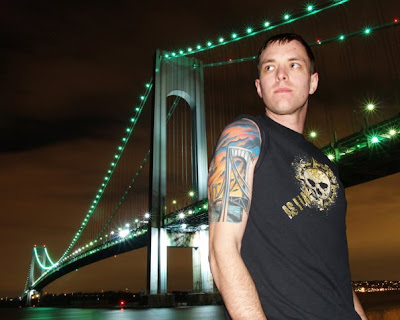 The piece, which Josh says took about five and a half hours over two sessions, is one of several tattoos that he has. You'll have to wait until a later date for us to share those here at Tattoosday.

Thanks again to Josh for sharing his awesome Verrazano Bridge tattoo with us here on the site!
Posted by Tattoosday at 5:27 AM

The bridge is beatiful and so is the tattoo. Josh is kinda 'double-lucky': if he want to see the Verrazano Bridge he can either look out of the window or look into a mirror.

Wow. That's awesome. Very original. I wonder if anyone has ever done something like that for the Golden Gate? Or Sydney Harbor?

Hey Josh, Thanks for the shout out! A quick update- I (Mark VanNess) have been traveling the world tattooing. You can find my work and contact me at RustyAnvilTattoo.com
.