Mike's Tribute to His Thai Heritage

There are generally two kinds of Tattoosday subjects (and by subjects I mean people):

Those that let me take a picture or two and I never hear from them again, and those that send me nice messages and a correspondence more or less develops.

Last weekend I met a guy named Mike at the laundromat (which is turning out to be quite a lucky locale for inkspotting) and he falls in the latter category.

Not only was Mike friendly and interested in the site when I met him, but he has followed up our initial conversation with e-mails that have helped me create a much more thorough and well-rounded post than many readers may be used to.

Mike's tattoo is a tribute to his heritage. His father is from Thailand, so he considers himself "50% Thai". Check this out: 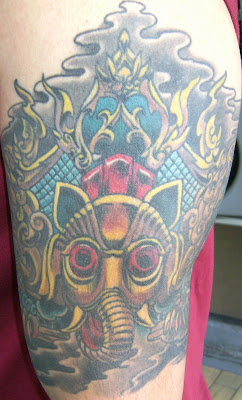 This piece does wrap around the left bicep, and on either side of the elephantine temple, there are "singha" lions: 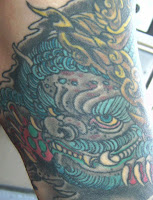 The idea for this tattoo started with a concept and evolved into the finished work in flesh above.

Mike started with the basic images, found online in the form of the elephant and lion masks, and the photo of a Thai temple: 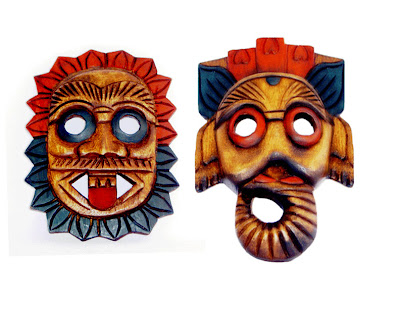 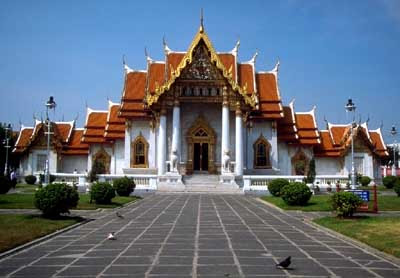 He notes that he wanted to use the Tribal elephant mask "because the Elephant is a national symbol of Thailand, they [were] used ... in wars and ... represent strength. I chose the Tribal 'wood' look mainly because it looks great and I thought it represented the 'old/history' of Thailand." He added that he finds Thai temples "amazingly beautiful" and that the two Singha lions on either side of the temple in the design "represent protection, and they usually are at the entrance ways of many Thai buildings".

He then tinkered with these images in Photoshop and came up with this rudimentary design: 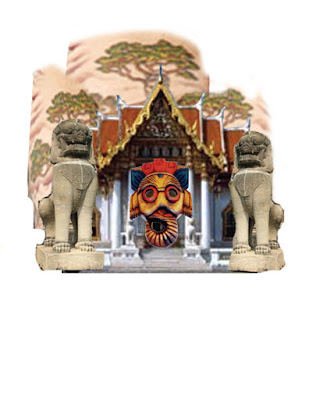 He took this artwork to Regino Gonzalez at Invisible NYC. Mike explains, "I showed him my idea and he actually kinda chuckled a bit. I told him I realized [that] this was a real shitty representation of what I want and that I hoped that he could do ANYTHING with it."

Mike continues, "...And then literally three days later, he called me into the shop and when I walked in, he had this HUGE AMAZING piece of art...I just turned to him and said, 'Let's do it' [and] I ... sat down right then and there for four hours and had the outline done ... I ... went back about three weeks later and had the black color and shading done, and then about three more weeks later I had the final color done."

What Mike explains is typical of great tattoo work. So many novices to tattooing are surprised that a nice piece takes a while, unlike it does on the reality tattoo shows, when an eight-hour piece often is edited down to a few minutes of air time. It's also the recommended way to get a great tattoo: bring in the framework of an idea and let the artist go to town.

And, if you have a good artist (which you should have, if you've done you're homework), you should put your absolute faith and trust in them. Case in point, Mike recalls "I asked Regino how he was going to color it and I was pretty nervous ... he looked at me and pointed to his head and said 'Trust me, I have a plan'. And that was it ... I walked away with what I think is an amazing piece of work ... I have since recommended Regino to anyone who asks my opinion, and I will continue to [do so] ....".

Incidentally, work from Regino has appeared previously on this site here.

Thanks to Mike for sharing his incredible work with us here on Tattoosday!
Posted by Tattoosday at 6:46 AM

I love stuff about thai heritage and history. It's a great piece. I'm finishing the first part of a sleeve too devoted to my thai heritage. I dig how the piece turned out and the color work is amazing.

Great tattoos...I was thinking I don't have enough fingers to ink what's on my mind these days...but then you already know that. lol