Who's Better Than Us: Chris Honors His Father

I met Chris in Brooklyn Heights one afternoon and asked him about his ink. He has seven tattoos in all, but offered up this section of his arm: 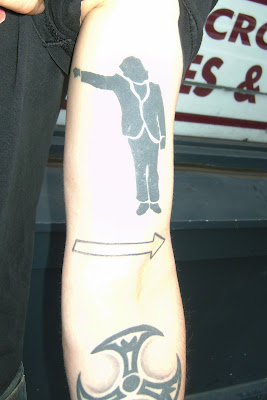 What seems at first like an odd juxtaposition of figures makes more sense when it is explained.

The piece is a memorial based on a photograph of his father, who worked with the team that made Woodstock (Paradigm), developing and experimenting with new film technology which was eventually used in the process of making the movie.

After searching for a while, I emailed Chris and asked if he could send me the photo. He generously obliged: 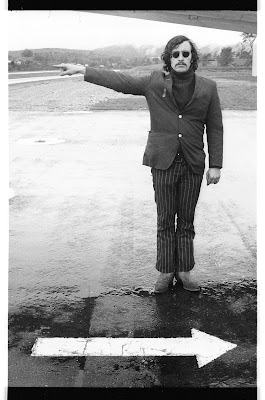 Seeing the source material on which this piece is based makes it cooler. The photograph appears in the book, and was taken years laterby one of the cinematographers of the Woodstock film, Chuck Levey somewhere in New Jersey.

And the back of the arm features a quote from Chris's dad, a statement he would often make, which seems genuinely appropriate from someone so deeply immersed in the culture of the 1960s: 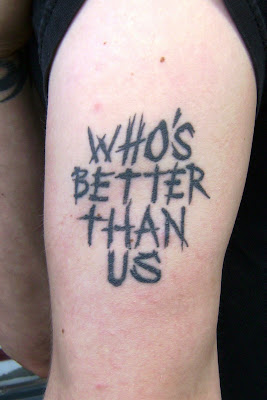 Chris had his tattoos inked by Nick Caruso at Fly-Rite Studio in Brooklyn. Work from Fly-Rite has appeared previously on Tattoosday here.

Thanks to Chris for sharing his work here on Tattoosday!
Posted by Tattoosday at 5:32 AM