Anja was visiting New York City from Denmark earlier this fall, when she ran into me in Penn Station. Of course, I was thrilled when she agreed to share this tattoo with us here on Tattoosday:

This tattoo on Anja's calf is based on the cover art from Es ist soweit, a 1990 album from a German band called Böhse Onkelz. 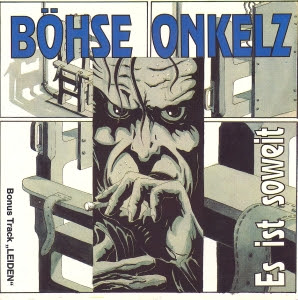 This record has significant meaning for Anja because it helped bring her and her brother together. She explained that they lived apart and didn't talk much, growing up in separate households. She was living with her grandmother, and came to visit her father and she was walking past her brother's room and heard him listening to this record. 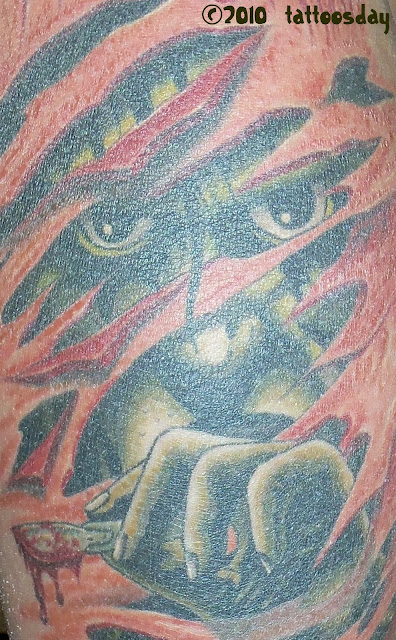 The music brought them together, as she stopped to talk to him about it, learned that he had been listening to Böhse Onkelz longer than her, and this common ground broke the ice. Whereas before they had very little to talk about, Anja credits the band and this album with helping establish ties with her brother.

The top of the tattoo starts a lyric 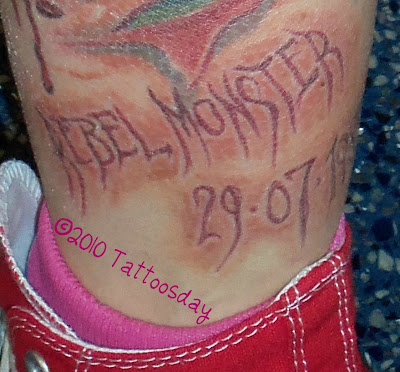 The lyric in question, "Let's forever be that Rebel Monster" is actually from a song by Volbeat, a Danish rock band, on their first album The Strength/The Sound/The Songs. The date below, "29-07-19--" is her brother's birth date.

This cool, meaningful tattoo was inked in Denmark by an artist named Dennis Wehler. I love how the words seem to be carved in her flesh.

Thanks to Anja for sharing this wonderful tattoo with us here on Tattoosday!

As a bonus, here's a little "Rebel Monster" from Volbeat:

Posted by Tattoosday at 6:15 AM

beautiful and cool tattoos.. ilike this