I met Chris earlier this month in Penn Station and he shared his 3/4-sleeve. He is the owner/operator of the Muscle Maker Grill at 92 Eighth Avenue in Chelsea.

His sleeve is a collage of designs that motivate and inspire him, with a skull design thrown in, to boot. 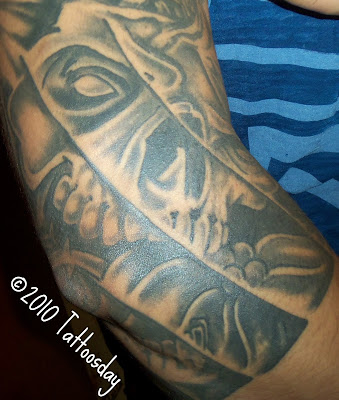 He has the phrase "Live Now. Shoot for the Stars" inked on his biceps. This motto is a nod to his ambition as a business owner.

The three pawprints tattooed below the elbow, on the left side of the photo, above, represent his three dogs (2 Cocker Spaniels and a mutt). 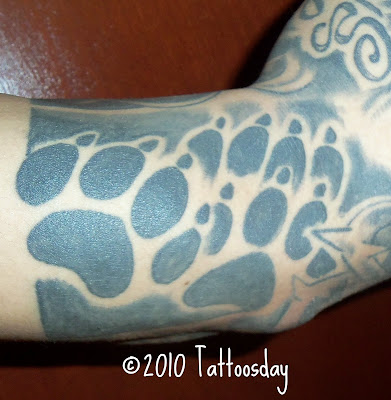 The cross and the prayer, "Lord, Protect Me" are based on his Catholic faith.

In all, Chris figures he's had about 10 hours of work done.

I had hoped to show a better shot of the peacock that is on his back, with feathers that come up over his shoulder, but could not get a clear enough picture. The shot above gives a great idea, however, of his tattoos.

All work is credited to Rick Schreck at the House of 1000 Tattoos in Middlesex, New Jersey. A piece from Rick appeared earlier this Fall on the site here.

Thanks again to Chris for sharing his ink with us here on Tattoosday!

Visit the Muscle Maker Grill website here.
Posted by Tattoosday at 6:05 AM

Nice work. I would love to ask him why the cross is a dagger and what that means to him.