I met Luis in Borders, Penn Plaza, last month and asked him about his tattoos. He has more than fifteen altogether, and three are based on Lotería cards, which are used as part of a Mexican bingo game, as well as in fortune-telling.

He shared two of these cards with me and explained that, as a first generation Mexican-American, these Lotería cards remind him of growing up.

The first one he explained is number 21, La Mano: 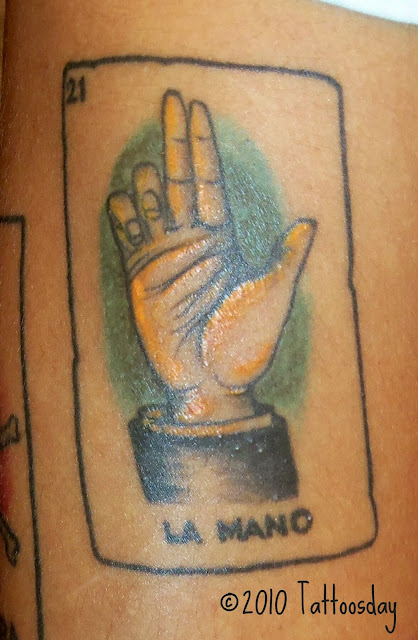 Luis explained that he relates to this card because "la mano" is Spanish for hand, and  he is a builder/electrician/carpenter by trade. He considers himself a "designer of ideas," and because he works with his hands, this is an appropriate card to have as a tattoo.

The second one he let me photograph is number 27, El corazón: 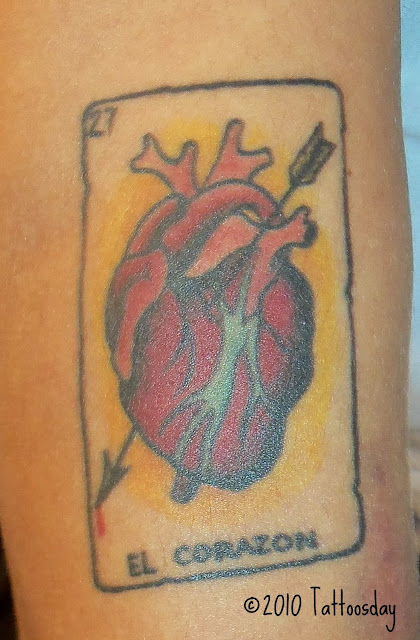 This card is appropriate, according to Luis, because "El corazón" means the heart and, Luis said, smiling, "I've got a big one".

There are a lot of different artistic representations of these cards out on the web, which tells me that they serve as inspiration for a lot of people.

Luis had these tattoos done by a tattoo artist named Fish, who was visiting Saved Tattoo in Brooklyn, but generally works out of Th'ink Tank Tattoo in Denver. Work from Th'ink Tank appeared here once before.

Thanks to Luis for sharing these two Lotería cards with us here on Tattoosday!

Posted by Tattoosday at 5:40 AM