I met Kaci on Seventh Avenue in the fall, close to 14th Street. She was walking by me in the opposite direction and I had to ask her about the tattoo on her right leg: 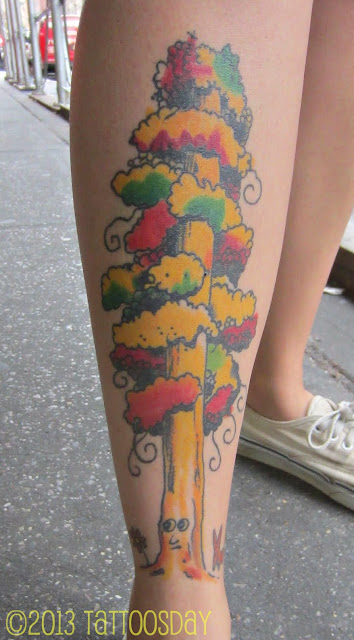 Kaci told me that this is an illustration of Skytree, a character in the He-Man story.

Having absolutely no general understanding of the narrative, Kaci gave me an abbreviated version of the significance for her:


"I just really like the story, it's Skytree. He's the oldest living thing in the world and He-Man has to destroy him to save She-Ra's father ... [and is] frozen and is held captive by this dragon who's the second oldest thing in the world ... He-Man finds out that Skytree basically gives life to everything else in the world so [He-Man] refuses to cut him down and goes back to the dragon dude and is basically he didn't do it. [The Dragon says]  You're the only one that's opposed me and showed some faith in humanity so I'll release [him] anyway."

Thanks to Kaci for sharing this cool tattoo with us here on Tattoosday!

If you are seeing this on another website other than Tattoosday, without attribution, please note that it has been copied without the author's permission and is in violation of copyright laws. Please feel free to visit http://tattoosday.blogspot.com and read our original content. Please let me know if you saw this elsewhere so I contact the webmaster of the offending site and advise them of this violation in their Terms of Use Agreement.
Posted by Tattoosday at 9:06 AM

Kaci’s tattoo is really cute and pretty! I like the colors and how they really draw in your attention. But the colors are also not too overpowering that the tattoo looks absolutely ridiculous. The story behind the tattoo is really interesting. I like how it is able to be interpreted many ways to fit your situation. The tattoo does this too, by not being too personal so that it is not relatable, and by being specific enough that the reference is not too abstract. Overall, I think it’s a really interesting (in a good way) choice!