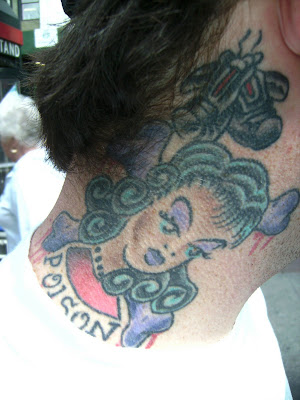 Last Friday was a banner day for inkspotting. By day's end, I had four great Tattoosday stories to tell. This is the third of the four, although it was the first encounter of the day. It certainly set the tone.

I was walking east on 34th Street when I spotted a well-inked guy walking in my direction. I am sometimes less-inclined to talk to people with a TON of tattoos, but I stopped him anyway and asked about his work.

Buddy seemed eager to share, and quickly raised his right pant leg to reveal, in red ink, the words "Boston Sucks". Right below it was a depiction of an anatomical part that would fit the epithet. I hesitated.

"It's kind of a family blog," I joked, "my daughter reads it." He seemed disappointed, but was understanding. "How about the neck tattoo?" I suggested. He was game. I snapped the photo above.

It was inked in Austin, Texas at, according to Buddy, a shop called Red River Tattoos, circa 2003. He has approximately 32 tattoos in all. Any story behind it? "I was drunk when I got it," he said. Knowing that, and the absence of any reference to a shop called Red River Tattoos in Austin, I am more inclined to believe it might have been True Blue Tattoo, which is located on Red River Street. Work from True Blue has appeared on Tattoosday previously here.

But then he added, "If you don't get a neck tattoo before you're successful, then you shouldn't get one".

This is not new to me, I have come across several musicians on Tattoosday before (here and here, for example).

"Cool," I said, "I'll link the band's page to the blog." In the back of my mind, I thought the name sounded familiar. 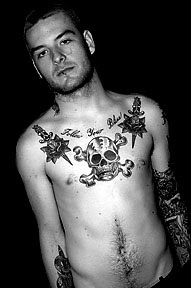 I thanked Buddy and we parted ways. It was only later that I realized that Buddy Nielsen wasn't just a singer from a band in New Jersey. Senses Fail is a significant act in the music scene. They're not platinum artists, yet. Their last record, Still Searching, sold 900,000 copies in the U.S. alone.

They've toured widely since they formed in 2003. I even have one of their songs in my iPod. The song, "Can't Be Saved" even refers to the tattoo on his chest (the video is below). So, Buddy's tattoo, the one that is up above (according to wikipedia has a second word "lady" below it), is the most famous tattoo I have photographed thus far for Tattoosday.

Thanks to Buddy for sharing his ink with us here!

The "Can't Be Saved" video:

Posted by Tattoosday at 6:00 AM

Y'know what Bill, it turns out, I've seen Senses Fail live before.. just found out today!