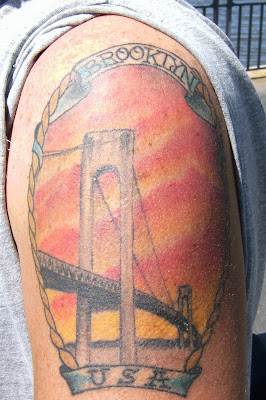 Just the other day, I posted a cool graffiti-style tattoo of the Verrazano-Narrows bridge, which connects Brooklyn to Staten Island.

While on the bike on Sunday, I spotted another amazing bridge tattoo. How amazing? Another Tattoosday first: I pulled up along side the owner of the piece while he was riding his bike and he pulled over to tell me about it.

This tattoo, which is a colorful depiction of the V-N Bridge during a sunset, was inked by Joe at Brooklyn Ink. The piece belongs to Paul, who knows, whenever he sees the bridge, he is close to home. One could say, then, that by wearing it on his left shoulder, the bridge is always close
to him, even when he is out of town.

We talked about the beauty of the stretch of shoreline which runs along the south of Brooklyn. Paul and I have a lot in common in that we love to take pictures of the bridge. In fact, check out these shots I took in January 2007 which are here on BillyBlog. The sunset always seems to be spectacular with the Verrazano in the foreground.

Paul has several other tattoos, one of which is slated for a future, more fitting, post in the next few weeks.

Thanks to Paul for sharing this tattoo with us!

As always, you can see work from Brooklyn Ink that has appeared previously on Tattoosday here.
Posted by Tattoosday at 6:16 AM

Wow, the sunset colors are beautiful and so vivid.