Vaj Shares His Interpretation of the Creative Process

The triptych above (ok, it's not technically a triptych, but I am calling it that as I divided it into three sections) belongs to Vaj (rhymes with Dodge), a filmmaker who I met across the street from Macy*s on 34th Street and 7th Avenue early last week.

This piece was inked about 16 years ago in California by Jeff Rassier, who currently works out of Black Heart Tattoo in San Francisco.

Vaj, who has been in the entertainment business for many years, based his tattoo on the interpretation of the creative process.

The center of the tattoo contains a jar with two brains: 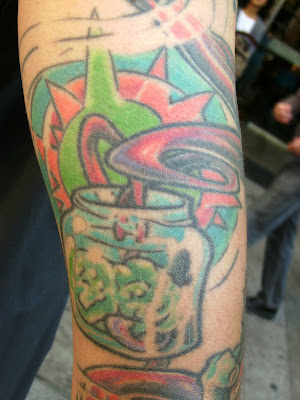 moving up and out of the jar is a an arm, at the end of which is a hand holding paper: 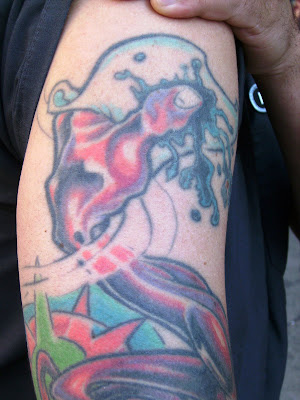 Moving down out of the jar is an arm, at the end of which is a hand holding a pen, which is dripping ink: 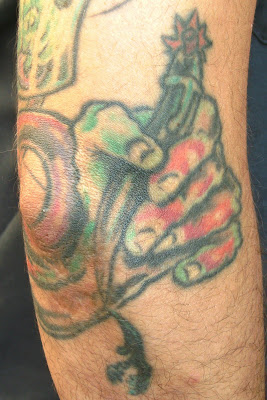 The two hands, each with pen and paper, are acting out the creative process, stemming from the two sides of the brain.

Thanks to Vaj for sharing this interpretation in his tattoo with us here on Tattoosday!
Posted by Tattoosday at 11:52 AM