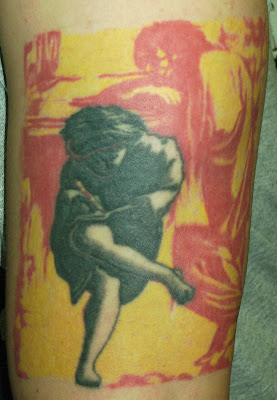 On Tuesday I was in Brooklyn Heights, walking toward Cadman Plaza on Clark Street. As I passed a local video store, Mr. Video III, I spotted some ink on one of the employees and decided to head in and introduce myself.

Sal has seven tattoos, but he chose to share the one above, from his left bicep. 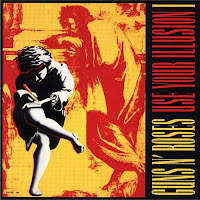 This is, of course, recognizable to anyone who is a rock fan, as the artwork gracing the cover of the 1991 Guns N' Roses album Use Your Illusion I. A G n' R tattoo appeared on Tattoosday previously here.

Sal had this inked because the album was released at a point in his life, when he was a senior in high school, when most people are most impressionable and affected by massive displays of musical force. The album, and by extension, the tattoo, was something he could cling to, a great avenue by which he could "express his rage".

With G n' R classics like "Right Next Door to Hell," "Don't Cry," "Back Off Bitch," and the Wings cover "Live and Let Die," the album is a tour de force of hard rock angst.

Sal also acknowledges that he, like many others who were fans of the band, developed a greater appreciation of classical art, as the image form the record (and its companion, Use Your Illusion II) are based on a detail in the Italian Renaissance painter Raphael's , The School of Athens: 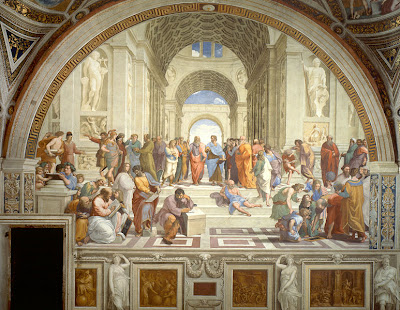 Or, the detail used: 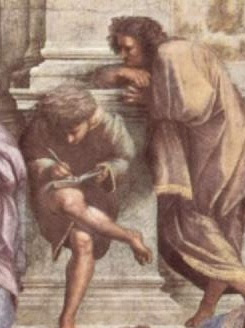 Sal says that this piece was inked around 1994 by an artist named Jason, who worked with the studio of the great Huggy-Bear Ferris in Park Slope. Work from Huggy-Bear has appeared here previously on Tattoosday.

Thanks to Sal for sharing his tattoo here on Tattoosday. As I will be passing by Mr. Video III on a more regular basis in the future, I hope that Sal would share more of his tattoos with us in the future!
Posted by Tattoosday at 12:36 PM

Wow, I'm familiar with the album but I had no idea the image was a detail from Raphael. Very cool.