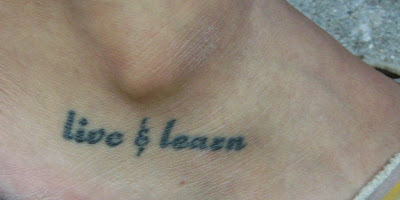 Last week I had just left the house when a woman passed me on the street. She had the words "live & learn" tattooed on her right foot. I caught up to her and introduced myself. Jackie had just moved into the building on the corner two days earlier, and I wished her a Tattoosday welcome to the neighborhood.

She explained her tattoo by acknowledging that, like most people, she makes mistakes in life and that the motto "live and learn" are words to help guide her through life. Being on her foot is significant, as she believes that the lessons she has learned have helped her understand the importance of taking life "one step at a time".

Jackie, in fact, has five tattoos, including one on her waistline and on her inner right arm, but she has this pair on the back of her neck: 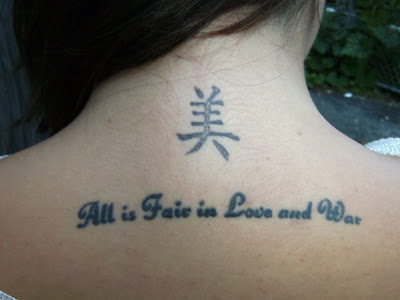 The kanji is the word for beauty and, unlike many unfortunate folks who don't research their tattoos properly, it is correct.

The popular proverb "All is fair in Love and War" dates back to John Lyly's 'Euphues' (1578). The original quote was "The rules of fair play do not apply in love and war. " John Lyly was a Renaissance English poet and playwright.

Jackie likes this quote because, as she said, "I'm a very passionate about things and if I believe in it, I will fight until the end".

All of Jackie's tattoos were inked at Bodytech Tattoo & Piercing in Gainesville, Florida. Jackie went to college at the University of Florida.

Thanks to Jackie for sharing her tattoos here with us on Tattoosday!
Posted by Tattoosday at 7:12 AM