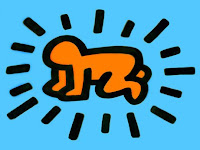 Last Saturday I posted an amazing tattoo the day after I spotted it and alluded to some posts that take longer than others. This is one of those examples.

I met Nina about a minute after meeting Mike and spotted the tattoo above. It's a tiny piece based on the graffiti art of one of my favorite artists, Keith Haring.

I asked Nina about it and she went on to catalog all eleven of her tattoos, most of which I photographed.

Whereas I appreciate someone taking the time to show me all of their ink, to do the subject justice in one post can be a daunting task.

As displayed above, Nina had at least one Haring tattoo. This first post will be dedicated to Nina's left arm, which boasts 7 of her 11 tattoos.

She actually has three Haring pieces, including the barking dog:

I've always been a fan of Haring, and it was a phenomenal Haring chest piece, spotted at the 2007 Siren Festival on Coney Island, that inspired me, in part, to start blogging about ink. Here's the third of her Haring pieces: 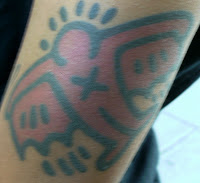 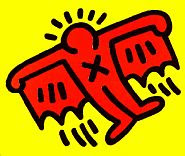 Haring was prolific in his short life, often repeating elements in his work. I have included in this post the works that are most likely used as the basis for these tattoos.

Nina is a big fan of the work of Andy Warhol, as well. She credits her love of his and Haring's work to a relative - her aunt worked at Warhol's Pop Shop in the 1980s, and it was always part of the family discussion.

She has a relatively obscure Warhol piece on the inner part of her bicep: 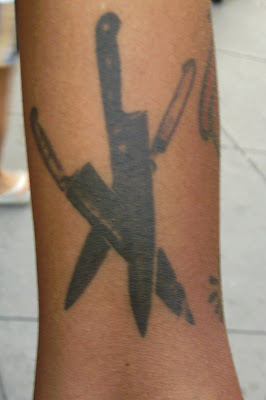 I should say, it is obscure in the sense that I am unfamiliar with it. It is based on his silk-screened Knives: 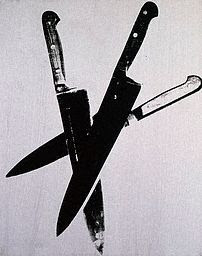 Most stunning among the Warhol and Haring tattoos is her Marilyn Monroe piece, which is based on an iconic Warhol work: 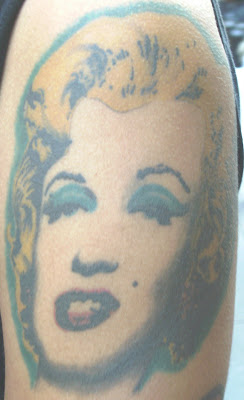 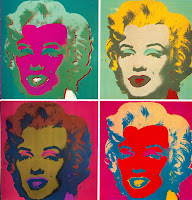 On her inner forearm, Nina sports a sweet pin-up piece that she believes is based on a piece of German art, circa World War I:

She loves pin-up art and this was one of the first pieces she had inked.

Not pictured is the word "Say" tattooed on her inner wrist.

All her ink was tattooed by Dan at Amazing Grace Tattoo in Geneva, New York. She's kept him busy in the past year, having just turned eighteen, and he is responsible for all of her body art, all done within the past twelve months.

Thanks to Nina for sharing her passion for tattoos here on Tattoosday. Be sure to check back for more from Nina in the future.
Posted by Tattoosday at 9:10 AM

hey nice blog
you should check out my tattoo blog when you can http://tatttoos.infoarticles.org
thanks