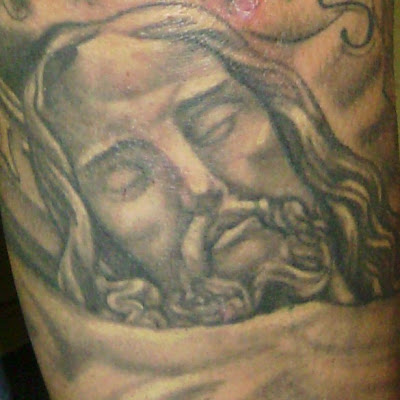 Religious imagery is among the most popular of themes in tattoo art. There is, to the shrinking minority of people who don't like tattoos, a greater level of acceptance of Christian-themed body art.

[Jewish tattoos are coming along, but the majority of Jews have fundamental issues with ink on Jews. Islamic tattoos are less common, and I can't speak to their acceptance. Eastern religious tattoos may be the most popular of religious ink, but there is a greater understang of body art when it comes to Hindu and Buddhist themes. But I digress.]

I generally avoid talking to people about full sleeves, but when I started talking to Jesse while we were browsing the books at the Chelsea Salvation Army store, it was clear that his right sleeve, which continued onto his chest, was the most important work he had.

Jesse's ink is a reflection of his faith. It is inspired by religious images that he has come across while visiting churches in Europe. He couldn't give me the specific locations of the art which inspired his work (Rome, Paris), but I'd be happy to hear from readers who may recognize the
work.

Aside from the obvious depictions of the Virgin Mary and Jesus, Jesse also pulled up his shirt to show me the most recent of his ten tattoos, which was the extension of his sleeve into his chest: 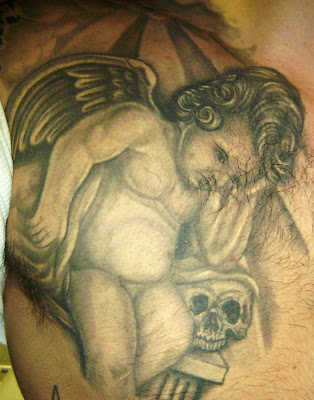 All of this work was done by Mike Pastore at Masterpiece Tattoo in Staten Island, New York. Work from Masterpiece has appeared previously here.

Thanks to Jesse for sharing his tattoos with us here on Tattoosday!
Posted by Tattoosday at 6:48 AM