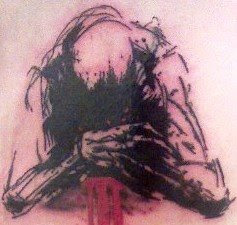 I technically didn't meet Ryan, but he did respond to a flier I passed out. I gave it to his girlfriend, we're guessing around 34th Street in Manhattan, she passed it to him, and he e-mailed me the following photo:

Initially, all he told me was "It's a Derek Hess piece. It's my blood around it in the ... photo. It was done by Nick [Males] @ Silk City Tattoos".

Of course, I know inquiring minds would want to know more, so I asked him for more specifics.

"It's a piece of art that Derek Hess did [it's entitled "Hemorrhage"].

I have the print on my wall in my room, among others by him...this is just my favorite one. My girlfriend was getting her garter done on her leg and I had asked [Nick] if he could do it. He said yeah, so when she went for her second sitting, I got mine done. I think it took about 3 hours, theres a lot of detail in it. The black didn't hurt much but the blood was the worst part, non-stop pain with little to no breaks. A lot of fun."

Work by Nick at Silk City Tattoo has appeared on the blog previously here.

Thanks to Ryan for sharing his body art here with us on Tattoosday!
Posted by Tattoosday at 5:28 AM