On Monday, I met John Paul in Herald Square at 34th Street, after spotting a flourish of color on his inner bicep.

He was more than happy to show me this wonderful tattoo above.

John Paul explained that it is based on a prison tattoo from a Soviet Union gulag. The artwork represents a criticism of the regime of the U.S.S.R., depicting it, not as the common Russian bear, but as the brute gorilla. It is ham-fisted and out of control, with the symbolic hammer and sickle at the ready: 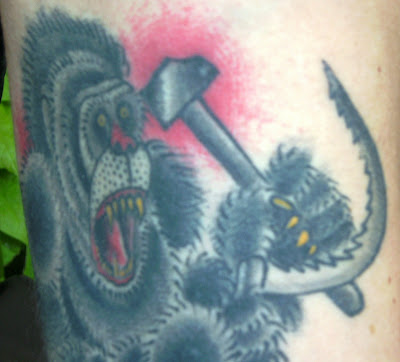 John Paul told me he is fascinated with the historic aspect of the former Soviet Union and the criticism of the regime as depicted in art, especially body art. Here's a great source if you are likewise interested in learning more about Russian prison tattoos:

The piece is incomplete in that one may notice the space below the gorilla has a banner that has yet to be filled out. John Paul said the original idea was to have the letters "FTW" for "Fuck the World" inked there, but he was not willing to have that permanently inked there. He is still deciding what to ultimately fill in the space.

This was tattooed about a year ago by Adam Warmerdam in Los Angeles. Adam is a free-lance tattoo artist in Southern California. It is one of four of John Paul's tattoos.

Thanks to John Paul for sharing this fascinating tattoo with us here on Tattoosday!
Posted by Tattoosday at 5:41 AM

I really like the concept that he is not yet ready to fill in the banner. It makes the tattoo even more interesting, to me, because of what it says about him.