Diablo Shows Off Her Tattoo on Hollywood's Biggest Night 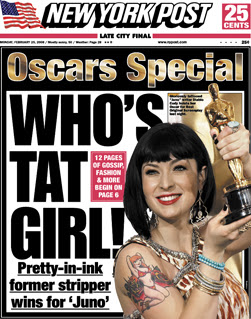 Ok, so this is out of the theme, in that I am in no way involved with the photography of this tattoo. But it is a big story and so I thought I'd throw out some ink news.

Diablo Cody won the Oscar for best original screenplay last night, and she made the New York Post front page, along with her pin-up tattoo.

But there's more to this than meets the eye... 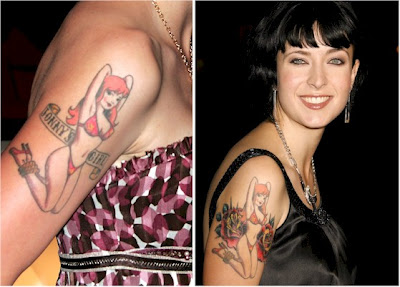 She actually just recently had "Jonny's Girl" covered up. Actually quite a fine job...you'd never know it's a cover-up.

A little plug, here's her book: 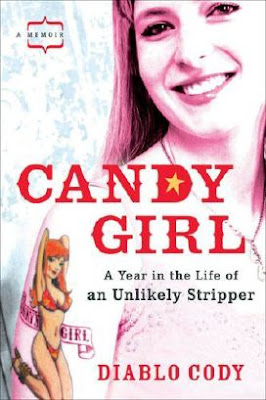 You can buy it here.
Posted by Tattoosday at 7:47 PM No comments:

One of my co-workers, Paul, has been and still is, one of my subject matter experts when it comes to the tattoo. As far as I am aware, he is the only one at my company with a full sleeve.

In addition, he has a leg done as well. I've been keeping him in the loop on Tattoosday matters since I started blogging about ink last summer. We have talked about featuring his work for a while now and, with the meat of winter sending shorts and sleeveless apparel into hiding, it seemed like a good time to get his Tattoosday feet wet.

So, we are starting with the beginning, the dragon on the inside of his right forearm: 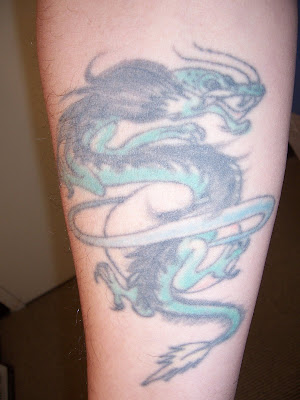 Many people may not realize, but tattooing was illegal in New York City until 1997. (More on that here.) Paul's first tattoo dates from "the Dark Ages," circa 1983.

As Paul relates, when he was 16, he went with his father to a tattooist in Alphabet City in Manhattan. The artist lived in an attic apartment, and one had to a) make an appointment to see him and b) know the password to gain admittance.

So while a young Paul was watching his father get tattooed, he realized that he wanted one, too.

His father agreed, as long as he thought long and hard about it and paid for it himself.

He found a dragon design he liked and returned with the money at a later date.

He told the tattooer, whose name he remembers as Davita, that he wanted it on his chest, but the artist looked at his slight frame (at 16, Paul estimates, he weighed 140 or so) and refused, saying Paul wouldn't be able to take the pain.

So it went on his arm. And he remembers that he paid $30 for the piece.

There was no significance to the dragon, other than Paul liked the aesthetics of it and had always liked dragons. Paul's left arm and leg are done in a Japanese style. He also has another tattoo on his chest and one on his back, perhaps the subjects of later posts.

Thanks to Paul for joining us on Tattoosday!

Update: After this posted, Paul remembered why he had the dragon done on his inner arm. He recalls an episode of Kung Fu, starring David Carradine, in which the main character lifts a barrel that is very hot. As a result (and I am certainly oversimplifying), he has a dragon burned onto his inner forearm. To the sixteen-year old Paul, this was way cool, so he chose that particular tattoo in that particular location after being told by the tattoo artist that a chest tattoo was out of the question.
Posted by Tattoosday at 5:40 AM 1 comment: