Al Shares Two for Tattoosday, Including a Rare Sole Tattoo

Back in August I received an email from Al, one of the thousands of people that commutes in and out of Penn Station on a daily basis.

As a reader of Tattoosday, Al recognized that a lot of my inkspotting occurred in this major transit hub and he had recently thought he saw me there. Of course, this was quite feasible, as I generally pass through Penn during my lunch hour, as well as before and after work.

He also sent me some photos and, as occasionally happens, the e-mail from Al got buried in the deluge known as my inbox.

But we are excavating it here to share some of Al's ink. I'll let him do the heavy lifting....


"... I often read your blog and I especially love the stories you include about how you ran in to each person or convinced them to show you their tattoos or whatever it was.  Also the fact that you include the artist info (when you can) is amazing!  So thanks, and keep up the good work!

... [Included are] pictures of two of my tattoos that are especially fun for me, and in their own ways, unique.  The first at the top of my back, and it's an image of a jaw harp done as if it were an old-school traditional piece. 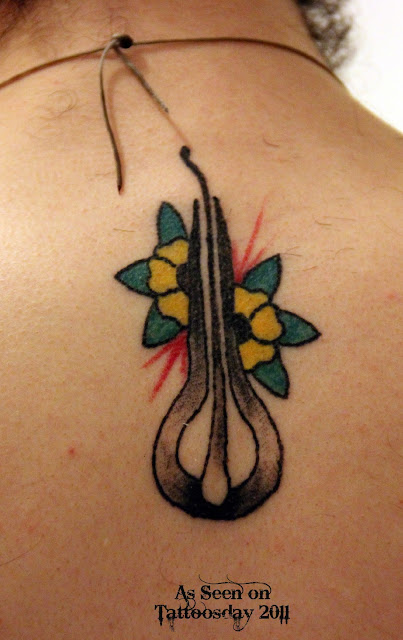 If you haven't heard of a jaw harp (also called Jew's harp, trump, mouth harp, etc...) check it out!  It's a very simple instrument that has a place in indigenous cultures all around the world...and it's one of the most ridiculous and fun instruments I've ever played.  I especially love that it's considered something of a "low class" instrument in most cultures.  Sort of the underdog of the musical world!  This piece was done by Michael Hastings at the Boston Tattoo Company in Somerville, MA.

The second one is less of a serious tattoo and more of a product of "hey, you know what would be funny?"  A tattoo artist friend of mine and I were joking around, and I convinced him to tattoo the bottom of my foot, more or less to see what would happen. 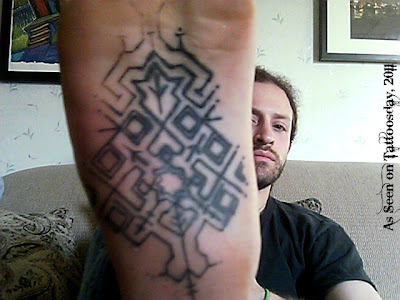 Anyone will tell you that getting a tattoo down there is a bad idea, but how exactly would it work out?  Well, the first picture you see is on it's second or third day of life -- already blown out in areas and starting to fade. One month later, and you can see it's already nearly half gone. 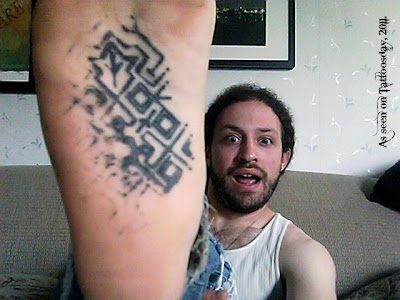 It was a fun tattoo experiment, and it earns me major badass points everywhere I go :-)"

Thanks to Al for sharing these tattoos with us here on Tattoosday!

This entry is ©2011 Tattoosday.
If you are reading this on another web site other than Tattoosday, without attribution, please note that it has been copied without the author's permission and is in violation of copyright laws. Please feel free to visit http://tattoosday.blogspot.com and read our original content. Please let me know if you saw this elsewhere so I can contact the webmaster of the offending site and advise them of this violation in their Terms of Use Agreement.
Posted by Tattoosday at 8:42 AM