What jumped out at me when I saw Mary in front of Penn Station, on a drizzly late afternoon during Rush Hour, was this amazing tattoo on her left bicep: 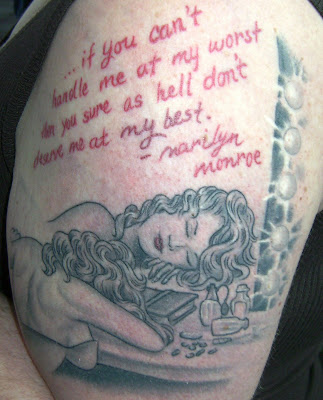 Marilyn Monroe tattoos are not incredibly unusual (click here to see those that have appeared on this site previously), but this one strays from the glamorous and dabbles in the tragic.

What we see is the back of her head, passed out on a make-up table scattered with toiletries and pills. In the reflection of the dressing room mirror you see the woman's face, serenely unconscious.

And, in an effect that makes it look like it was scrawled in lipstick on the mirror, the quote,

"...if you can't
handle me at my worst
then you sure as hell don't
deserve me at my best.
-marilyn
monroe"

The full quote, as uttered by Ms. Monroe, is "I'm selfish, impatient, & a little insecure. I make mistakes, I am out of control, & at times hard to handle. But if you can't handle me at my worst, then you sure as hell don't deserve me at my best."

It's certainly a striking piece, and Mary gladly shared it and elaborated. She feels a bit of a link to Marilyn in that the starlet and Mary's grandmother were born on the same date, June 1, 1926.

Plus, there's the universal tragedy of Monroe's demise that resonates on so many levels with so many people. She's a sex symbol to some, a victim of an abusive male-dominated industry to others. And the quote rings true with self-actualized strength. "I am what I am," she seems to say, "if you can't roll with me through the difficult times, then you haven't earned my company in the good times." Do note, this is my interpretation, not necessarily Mary's.

This tattoo was inked, along with many others, by Jimbo at Lark Tattoo. Work from Lark Tattoo has appeared on Tattoosday previously here.

Mary has thirteen tattoos in all, and shared two others as well.

She graciously lifted her shirt to reveal this poetic snippet, tattooed on her right side, accompanied by a peacock feather quill pen on parchment: 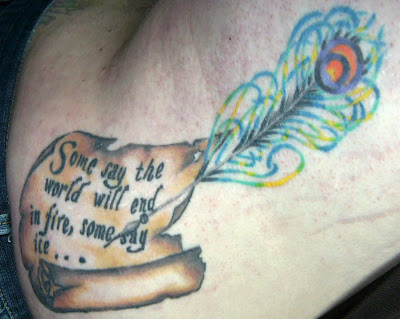 The quote "Some say the world will end in fire, some say ice..." is from the opening lines of a poem by Robert Frost, entitled "Fire and Ice":

Some say the world will end in fire,
Some say in ice.
From what I’ve tasted of desire
I hold with those who favor fire.
But if it had to perish twice,
I think I know enough of hate
To say that for destruction ice
Is also great
And would suffice.

The tattoo points to another piece, at the base of her neck: two flaming ice cubes: 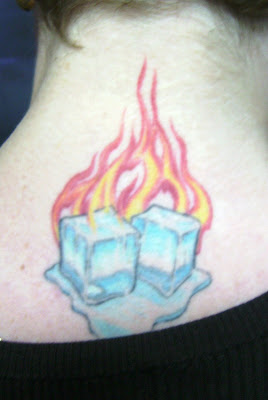 As I mentioned previously, my encounter with Mary occurred outside of Penn Station during rush hour, so I didn't delve too deeply into the meanings of these tattoos. But I do thank Mary for sharing them with us here on Tattoosday and invite her to elaborate further in the comments below.
Posted by Tattoosday at 5:39 AM

Tat of Marylin is very interesting. The qotation is so lovely and arch, but when you think deeper into it and look on the Marylin on Mary's tattoo - it's so sad.
What concerns fire and ice attoos - this is one of the most popular themes. I guess we, humans, love contrasts.