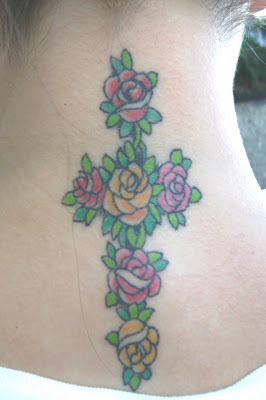 I spotted this beautiful cross of flowers on the back of Kelly's neck in front of the entrance to Penn Station on Seventh Avenue.

Regular readers may sense a little bit of déjà vu. Did I say her name was Kelly? Sure did. She was, in fact, the third woman named Kelly whose tattoos I photographed in just two days.

Kelly's floral cross is a memorial for her best friend who died in the last few months. The tattoo was inked just a month ago. She didn't offer many details about her friend's death, nor did I press her for them, as she seemed to me that she was still deeply saddened by his passing.

It almost seemed appropriate that she had a second tattoo, which had been her first, inked on her left ankle about two years ago. 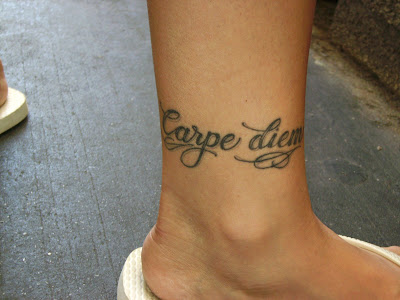 The phrase "carpe diem," Latin for "seize the day," is among the most popular "word tattoos," and for good reason. The concept of carpe diem has helped people live their lives proactively, rather than passively. Juxtaposed with a memorial for a young person who was taken from life early, it seems especially poignant.

Both tattoos were done by Civ at Lotus Tattoo in Sayville. Work from Lotus has appeared previously on Tattoosday here.

Thanks to Kelly for sharing her two tattoos with us here. The loss of a close friend is not easy. Here's hoping both pieces give her the strength she needs to move forward and past this difficult time.
Posted by Tattoosday at 8:30 AM