I was working on my blogger publishing platform, marveling that I have published over 1700 posts on Tattoosday over the years, when I noticed that I have 23 drafts that have yet to see the light of day, or are just sitting there, functioning some way.

I decided to purge these old semi-posts, but thought I would give them life in a mass post or two (or three or four).

Last year when I attended the New York City Tattoo Convention, I was awed by the spectacle of it. My inkspotting brain overloaded as I processed the data before me and, despite many people expecting a flurry of posts, I wrote one dispatch and only photographed three people and reported on those here and here on Tattoosday.

This year, I approached it differently. My lovely wife Melanie joined me, and I hoped to introduce her to several people I have met through my inkblogging experience. I also enjoyed observing her closely as she was the recipient of the overstimulating organized chaos of the event. And despite our combined reverence for the art, our combined ten tattoos seemed collectively paltry when compared to visions of sleeve after sleeve, chest pieces, back pieces, and full body suits.

Acknowledging that it is impossible to fairly "cover" a three-day event when we hung out for only 3-4 hours, I offer up a snapshot, rather than a recap.

As for the typical Tattoosday tell-me-about-it-post, I only collected photos from one attendee, whose amazing work is here.

Upon arrival, we did a few loops, checking out the various booths, artists, and attendees.

Of note were the artists at Sacred Tattoo. Picasso and Lalo were finishing up sketching an immense octopus on the back and shoulder of a convention-goer. He would eventually get some of the piece completed, as the two artists tattooed him simultaneously.

We were also drawn in by the two artists from Japan who were not only tattooing, but they were using traditional equipment. This is always a big hit at the convention, and generally draws a crowd throughout the day as the clients lay on the floor, barely flinching at the repeated penetration of the needles. Gawkers flinch for them enough. But it's still an inspiring site to see a generations-old art practiced in person.

I could fill a month or two with dispatches from Roseland if I wanted to. But I don't. Imagine, I go everywhere with my little Polaroid digital camera, just to be prepared to take a picture of someone's tattoo. Yet, put me in a convention hall where it's hard to find someone without ink, and I exercise a form of abstinence. The phrase shooting fish in a barrel comes to mind.

Before taking the one set of photos I couldn't resist (Greg and his sharks here), Melanie and I stopped by to say hello to Marisa from Needles & Sins, working at the Father Panik booth. We checked out her new foot tattoo and, while chatting, the woman who had been, hours earlier, under Dan DiMattia's needle, stopped by to say hello, her right thigh swathed in cellophane as a traditional post-tattoo dressing.

Di Mattia's tribal-style black work popped out visually even under the plastic wrap and we just stood and admired how beautifully done it was.

So, it was a relatively short stint at the Convention this year, but well worth the price of admission.

Obviously, pictures would have been nice, which is why this was relegated to the dustbin of Tattoosday archives.
Posted by Tattoosday at 10:32 AM No comments:

Katrina and the Headless Victorian

One of the last photos I took at the NYC Urban Tattoo Convention back in June was this tattoo on Katrina:

The work is by Tig Quest at Big Bang Ink in Brooklyn.

When I met Katrina, it was very loud, so I didn't get much information, other than her artist's info.

The message of the tattoo is clear, however - "The idea is to die young as late as possible." flows across the banner behind the decapitated woman in a ball gown. The quote is attributed to British anthropologist Ashley Monatgu.

Thanks to Katrina for sharing her tattoo with us here on Tattoosday!


If you are seeing this on another website other than Tattoosday, without attribution, please note that it has been copied without the author's permission and is in violation of copyright laws. Please feel free to visit http://tattoosday.blogspot.com and read our original content. Please let me know if you saw this elsewhere so I contact the webmaster of the offending site and advise them of this violation in their Terms of Use Agreement.
Posted by Tattoosday at 6:30 AM No comments:

Rachel and Her Tree of Life

I met Rachel after work one day on Wall Street and asked her about this tattoo gracing her right arm:

It's a pretty cool concept with our solar system swirling above a tree bordered by an embryo and a skull.

She credited the work to Rich from High Roller Tattoo in Hicksville, New York.

"It was like six or seven years ago," she told me, "it was just something I came up with artistically and he [Rich] cleaned it up ... it's basically the tree of life."

Rachel even went so far as to send me a side-by-side comparison of the tattoo, then and now, as an interesting illustration on how the tattoo has aged over six years: 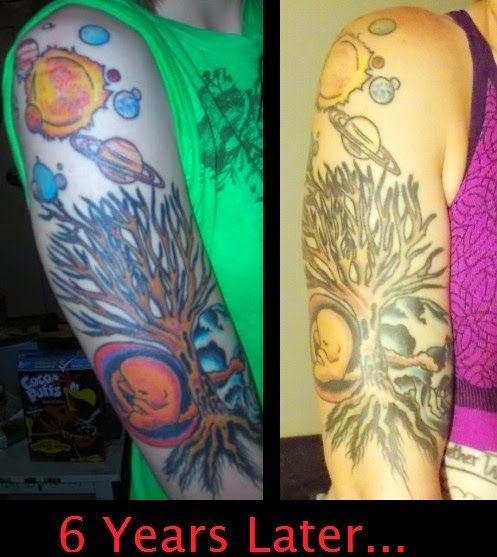 Thanks to Rachel for sharing this cool tattoo with us here on Tattoosday!

If you are seeing this on another website other than Tattoosday, without attribution, please note that it has been copied without the author's permission and is in violation of copyright laws. Please feel free to visit http://tattoosday.blogspot.com and read our original content. Please let me know if you saw this elsewhere so I contact the webmaster of the offending site and advise them of this violation in their Terms of Use Agreement.
Posted by Tattoosday at 9:45 AM 1 comment:

Once in a blue moon, I'll get off of my bike on the bike path to ask people about their tattoos. I rarely will disembark and hop off onto a sidewalk to interview someone. However, this summer I did just that, back in August, when riding along Ridge Boulevard in Brooklyn, I saw a woman with an amazing tattoo in front of the Bay Ridge branch of the Brooklyn Public Library.

I can only imagine how disconcerting it is to have some guy jumping off his bike to ask about your tattoo but, fortunately for me, Elisa was forthcoming and allowed me to take a photo of this gorgeous piece on her upper left arm:

Elisa gave me some details about this incredible tattoo:

"I love pulp paperbacks, and the art work on the covers. I collect them. One of my favorite artist's is Robert Maguire. His covers are beautiful. I also love Jim Thompson. This is the cover art from [his 1957] book called, Wild Town. I love her, and identify with the emotion and clandestine darkness of this cover. 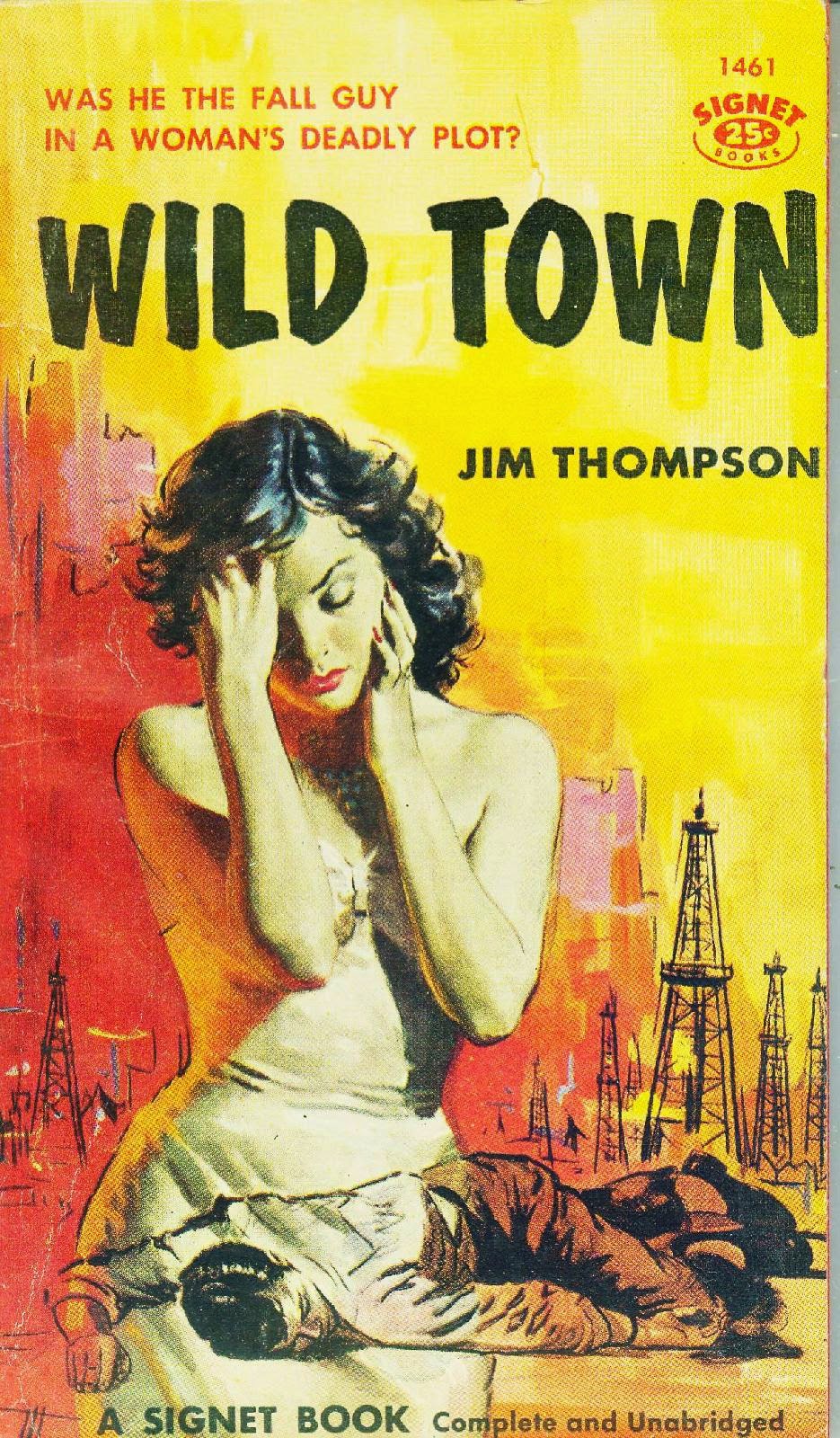 Elisa credited this tattoo to an artist named Karel Mato, who works out of Electric Church Tattoo Parlour in Albuquerque, New Mexico. Karel is a good friend of Elisa's and he tattooed this piece on one of his visits to New York. If you're interested in Karel's work, check out his shop's Facebook page, linked above, and see some more of his amazing tattoos.

Thanks to Elisa for sharing her tattoo and the story behind it with us here on Tattoosday!


If you are seeing this on another website other than Tattoosday, without attribution, please note that it has been copied without the author's permission and is in violation of copyright laws. Please feel free to visit http://tattoosday.blogspot.com and read our original content. Please let me know if you saw this elsewhere so I contact the webmaster of the offending site and advise them of this violation in their Terms of Use Agreement.
Posted by Tattoosday at 10:52 AM 2 comments: