At the beginning of November, I found a cool tattoo where I least expected to: a bat mitzvah. Such occasions are not generally tattoo-displaying events, especially with the misconception that tattoos and Jews do not go together. However, we here at Tattoosday know better and I, with my two, and my spouse with her four, are always appreciative of a finely-inked piece.

The bat mitzvah girl was too young to be tattooed, but her older sister wasn't, and she had something on her back that I noticed in the shul. Nonetheless, she was not the person who ended up here on Tattoosday.

During the cocktail hour, post-service, pre-dinner, my lovely wife spotted a be-flowered bicep of a woman at the party.

However, she disappeared once we are all seated, and I figured that was that. Besides, I had no printouts of the blog with me, just the camera.

Later in the evening, post-dinner, post-performance (the bat mitzvah girl did a song and dance for the guests' entertainment). A bit after that, I spotted the woman on the other side of the
ballroom, seated at a table. I hate interrupting people while they are conversing with others, so I waited.

A bit further on, I saw her just outside the entrance, smoking a cigarette. Smoking may be hazardous one's health, but it seems to be Tattoosday's Best Friend. I've found the Smoking Tattooed among the most approachable, as they are standing around and not necessarily in a hurry anywhere. And by talking to them, I am not interrupting anything (generally speaking).

So, out I went to introduce myself and tell her about the blog. And, of course, she was totally cool. It turns out she had been the bat mitzvah girl's choreographer. Her name is Dana Athens, and she is a singer as well (check out her website or her MySpace page). I finally got a good look at the flower on her right biceps: 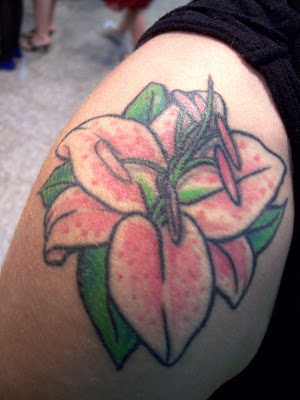 Dana explained that the tattoo is a stargazer lily, inked for inspiration as it represents "always reaching for your dreams". It is one of five tattoos she has. 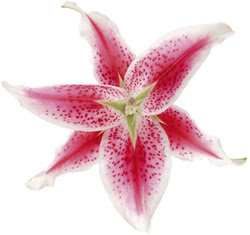 When I asked her where she had it inked, she started, "A great artist named Peter...."

There's something about having been mutually tattooed by the same artist. It's more than just both knowing the same person. You both have let the same person artistically alter your respective bodies for life. I think it's a bond only the tattooed truly understand.

So we chatted and I took pictures of her lily. After we went back inside, I tracked down my wife, Melanie, and brought her over to Dana to introduce her.

Again, there was that connection between the mutually-tattooed. Melanie has had 3 of her 4 tattoos inked by Peter. She showed Dana her tattoos and we chatted awhile.

It was an unexpected bonus to an already festive evening.

My apologies to Dana for the delay in posting this sweet tattoo. Thanks again, Dana, for sharing your lily with us!
Posted by Tattoosday at 6:00 AM

what a beautiful lily! i actually have two stargazer lilies, one under each collarbone, that i gave myself as graduation gifts after finishing up my bachelor's at syracuse university. i guess the meaning rings true for a few of us!

Stargazer is my favorite flower...I too have a one on my top right of my back and the only one I have. I love it because it looks so real and 3D like.

I have a stargazer lily on my right should that I got in homage of my Great Grandmother, who i look EXACTLY like.... i get lots of comments on it, especially from women...... Dana's is very nice :-)