One of our lost posts of the summer was from the NYC Urban Tattoo Convention. I met a guy named Alfredo who shared this back piece: 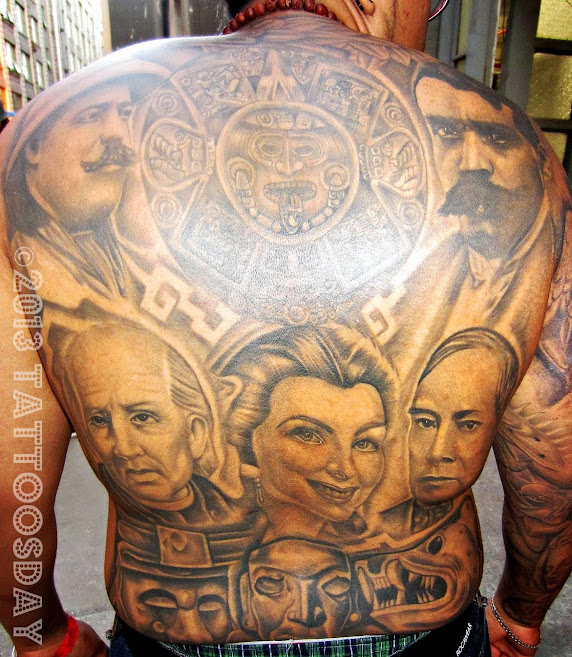 Alfredo explained, “It’s all Mexican history … all about independence about Mexico … from Aztecs … to the independence from Spain.”

He credited Marco Rodriguez from Inked City Tattoo in Trenton, New Jersey with this amazing work.

Thanks to Alfredo for sharing this with us here on Tattoosday!

If you are seeing this on another website other than Tattoosday, without attribution, please note that it has been copied without the author's permission and is in violation of copyright laws. Please feel free to visit http://tattoosday.blogspot.com and read our original content. Please let me know if you saw this elsewhere so I contact the webmaster of the offending site and advise them of this violation in their Terms of Use Agreement.
Posted by Tattoosday at 6:49 AM No comments:

Barred For Life: An Encounter and A Tattoosday Book Review

As a Gen-X child, the Black Flag bars are familiar to me. I’ll be honest, I was never a huge fan, but I had friends that were, coming of age in the 1980’s.

I remember first seeing Black Flag on film in the groundbreaking The Decline of Western Civilization, screened at the University of Hawaii Physical Science Auditorium, whose film series had a cult following  among teens in Honolulu in the early 80’s. It was there that I saw Rocky Horror (many times), Ralph Bakshi’s Wizards, Russ Meyer's Up!, The Song Remains the Same, and the Black Sabbath/Blue Oyster Cult concert film, Black and Blue.

The film didn’t shake my core like it did many of my friends, but my middle-aged memory cites it as my first encounter with Black Flag. Their emblematic bars found their way onto my notebooks, sharing the doodling of metal band names and logos. The bars remind me of adolescence and rebellion.

Other people’s rebellion, not mine, mind you.

I won’t claim to be someone I’m not, or someone I wasn’t.

I don’t have any Black Flag tattoos on me, and I never will.

This past summer, on my way to a job interview, I was in lower Manhattan in a suit on a sweltering day when I met Harley, a woman with a lot of ink. I had a few minutes before my interview and asked her about her work. She showed me her back: 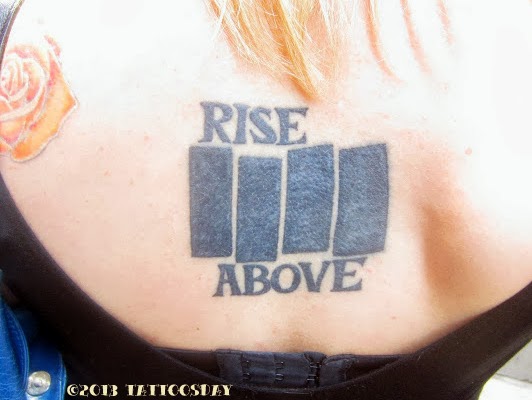 Running into Harley and having her share this tattoo seemed fortuitous, as I had just received a copy of Barred for Life in the mail. Subtitled “How Black Flag’s Signature Logo Became Punk Rock’s Secret Handshake,” this book was on my list of titles to review, and there had just been several events in New York celebrating its release.

I envisioned a big post, combining Harley’s tattoo and the review. This is that post (obviously), but just fashionably late to the party.

A word first about Harley’s tattoo, which she credited to Troy Denning at Invisible NYC. Harley told me, when I asked her why she got the "Rise Above" tattoo, simply, “to rise above.” She added later, “And to … let nothing keep you down...”

As for Barred for Life, I can’t think of a more compelling gift for someone who is either a 1) punk/hardcore fan; or 2) a fan of simple tattoos that mean a whole lot. So, if you know someone looking to use a bookstore gift card this holiday season, tell them to special order this book.

Let’s face it, the Bars are fairly rudimentary – four rectangular blocks offset in equidistant parallel orientation. Barred for Life unveils a wide array of variations on the tattoo, which anchors album art and other punk sentiment. The really compelling aspect of each tattoo is that of the interview that accompanies it.
We get an inside view into the minds of people who have been “barred for life,” including the fan’s relationship with the band, the story behind the tattoo (right up our alley!), and the favorite singer/song/album trifecta. We’re also treated to interviews with current and former band members, with Henry Rollins noticeably absent.

The scope of this volume is magnificent. The number of people who are “barred for life” is staggering, just based on this sampling alone. Think of the thousands of others who have been similarly branded – where a tattoo of a band logo goes above and beyond one’s appreciation of the group itself.

That said, this is more than just a tattoo book – it’s a chronicle of a mindset, a visual exploration of a family that united around a symbol that inserted itself as a logo of a punk band, and evolved into a cultural icon.
Thanks to Harley for sharing her Black Flag tattoo with us here on Tattoosday, and to Stewart Dean Ebersole for putting together such a great chronicle of bars tattoos.


More info on the book here.

If you are seeing this on another website other than Tattoosday, without attribution, please note that it has been copied without the author's permission and is in violation of copyright laws. Please feel free to visit http://tattoosday.blogspot.com and read our original content. Please let me know if you saw this elsewhere so I contact the webmaster of the offending site and advise them of this violation in their Terms of Use Agreement.
Posted by Tattoosday at 6:19 AM No comments: