A Sugar Skull for Beth

After her funeral, my wife Melanie was talking with her tattoo artist Thomas "Thomi Hawk" Hickey, and she knew she wanted a new tattoo paying tribute to her cousin.

Although she would have loved to have something from Thomi, it was logistically challenging, as we do not have a car and Thomi works out of New Jersey. The idea for a tribute evolved to include several ideas and, eventually, Melanie knew what she wanted. The question was, who would be the best artist for the job?

In the end, the answer was simple, and we headed back to Three Kings Tattoo in the East Village to meet with Alex McWatt, the artist who did Melanie's previous tattoo,

She consulted with him first to come up with a basic concept and talk about the elements she wanted incorporated into the piece, and then a few weeks later, she was back in the shop, with that old familiar sound of a tattoo machine buzzing in her ear.


And when she first saw it, she was pleased:

This is the tattoo, as it was first completed: 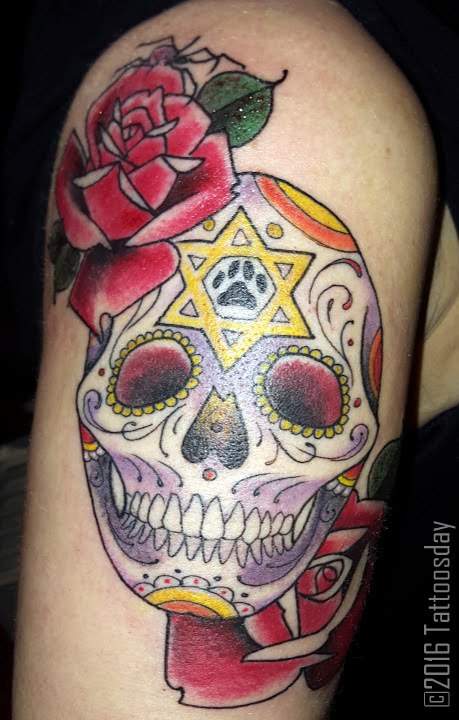 And a healed version, from a different angle: 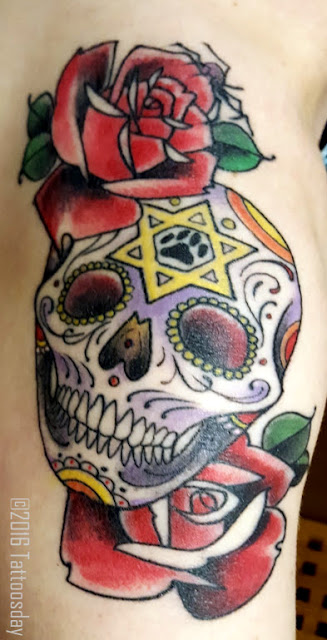 Melanie wanted a Sugar Skull to honor Beth. Beth's favorite holiday was Halloween, and the sugar skull is associated with the Mexican celebration of Día de los Muertos, which coincides with Halloween,and All Saints' Day in early November, when people gather together to remember, honor and celebrate friends and family members who have died.

Because we are Jewish, Alex replaced the cross often found in sugar skulls with a Star of David. The paw print in the middle of the star is an homage to Beth and her wrist tattoo, shared yesterday, which Alex used as a reference to add to the design.

Melanie also asked for the spider, perched on top of the rose, also as a nod to Beth and her love of Halloween. One of Beth's sisters told us that, when they went to Beth's house after the funeral, there were a lot of spiders around the house, and that they had never noticed spiders there before.

Melanie loves her new tattoo and wears it proudly as a fitting tribute to Beth.

Thanks to Alex at Three Kings, who we cannot praise enough, for his fine work.

We miss you Beth, but Melanie's sugar skull makes us smile and think of you. We know you'd love it too.

If you are seeing this on another website other than Tattoosday, without attribution, please note that it has been copied without the author's permission and is in violation of copyright laws. Please feel free to visit http://tattoosday.blogspot.com and read our original content. Please let me know if you saw this elsewhere so I contact the webmaster of the offending site and advise them of this violation in their Terms of Use Agreement.
Posted by Tattoosday at 6:38 AM No comments:

Everyone's reeling from a year that took so many celebrities from us. 2016 will be remembered as a devastating year from that perspective, and yet there are many of us who lost people near and dear to us - family members that left our lives too soon.

Last June, we attended a family event in New Jersey, and spent some time catching up with cousins. One of those cousins, Beth, has always been interested in Tattoosday, and we always talk about ink, inevitably, when we get together. She even appeared in these pages five years ago, here.

Anyway, at this latest gathering, Beth shared one of her new tattoos: 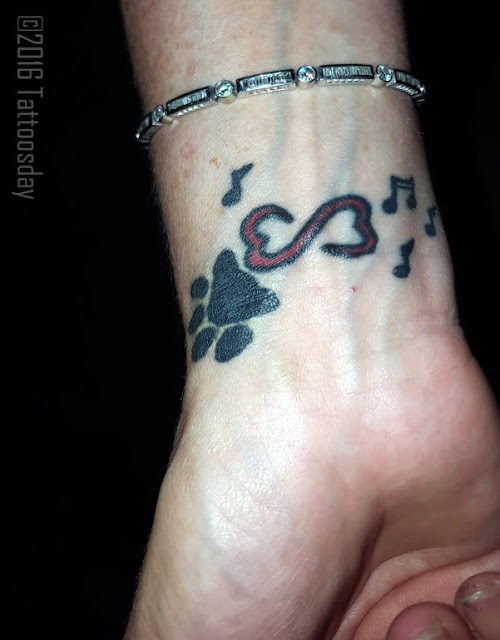 It's a simple tattoo, but Beth was very proud of it. The open hearts form a type of infinity sign. She summarized it saying that the open parts of the symbol allow "the good shit to come in, and the bad shit to go out." It was a marked note of optimism from her, as she elaborated that she was not letting the bad things in life bother her, and she was welcoming in the good. The musical notes are a nod to her love of music, and the paw is a tribute to her dog, Tiki. Beth loved animals and dedicated a lot of her time to dogs, even fostering puppies in her own home.

The piece was tattooed by Thomas "Thomi Hawk" Hickey at K&B Tattooing and Piercing in Hightstown, New Jersey.

Like a lot of Tattoosday encounters, I didn't post this tattoo right away. I hung on to it as the summer started and I had loads of material. This is a normal part of our "organic" process at Tattoosday. Looking back, I wish I hadn't waited.

My wife woke me up early one morning in August, in tears. Beth had passed away suddenly and unexpectedly overnight in her home. She was way too young and our hearts were broken. The photo of her tattoo sat on my phone. I had recently thought about messaging her to tell her I hadn't forgotten about it, that I was going to get to it soon.

That's an apt metaphor that we all know too well. We often take for granted that the people in our lives will be with us for a long time, and then, in a moment, they're gone.

Beth's funeral was heart-breaking, but it did afford our family the opportunity to start healing. We also got to meet Thomas Hickey and my wife and I chatted with him and his wife about Beth and her love of tattoos.

It is easy to forget in the midst of the wave of "celebrity" passings in 2016 that so many of us lost people near and dear to us. Cherish those memories. Remember the message in Beth's tattoo - let go of the bad shit in your life and allow the good shit in. We remembered Beth knowing that when she was taken from us, she was happier than she had been in years.

Thank you Beth, for your love and for your tattoos, and for being part of the Tattoosday family, always.

Beth was a huge supporter of Southern Paws Inc., a non-profit animal rescue group that rescues dogs and finds them new homes. Learn more about the organization here.


If you are seeing this on another website other than Tattoosday, without attribution, please note that it has been copied without the author's permission and is in violation of copyright laws. Please feel free to visit http://tattoosday.blogspot.com and read our original content. Please let me know if you saw this elsewhere so I contact the webmaster of the offending site and advise them of this violation in their Terms of Use Agreement.
Posted by Tattoosday at 9:43 AM 1 comment:

Over the summer, I met Kevin on Wall Street, and he shared this tattoo: 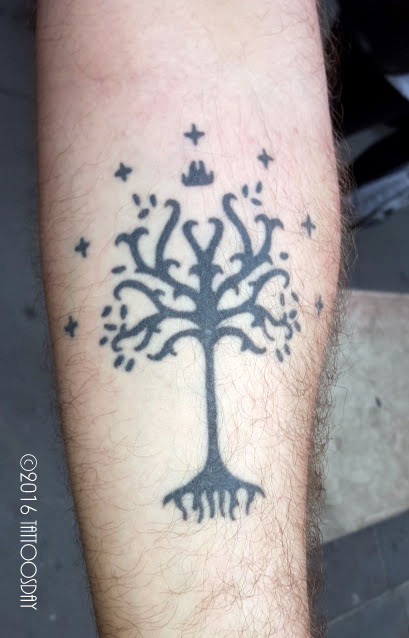 
"This is the tree of Gondor from The Lord of the Rings ... A lot of people are like, 'Is that a tree of life' and I'm like, 'no no no.' It's blossoming so that means the king has returned. [The stars represent] the seven kingdoms of man ... and [the crown at the top of the tree] is the king and the tree is like, in Tolkien literature ... a mythical tree ... I got it because I was failing high school, I was doing bullshit teenage stuff and my teacher bet me if I could write a 20-page paper with the primary source of The Lord of the Rings (because at that time [the movie] was coming out), she would pass me for the whole year in English class. And I found a primary source, and I got the paper, twenty pages, very concise, very collegiate for a high school kid and she reluctantly had to give me an A, she was like, 'this is actually one of the best things I've seen in like five years."

He had this done at Chicago Tattoo in Chicago, Illinois.

Thanks to Kevin for sharing his cool tattoo with us here on Tattoosday!

Posted by Tattoosday at 6:52 AM No comments:

Back in August, I attended a poetry reading at the KGB Bar in Manhattan. Among the readers was Rebecca Loudon, who has appeared on the Tattooed Poets Project twice previously. Rebecca introduced me to Paige after the reading and Paige had this cool tattoo: 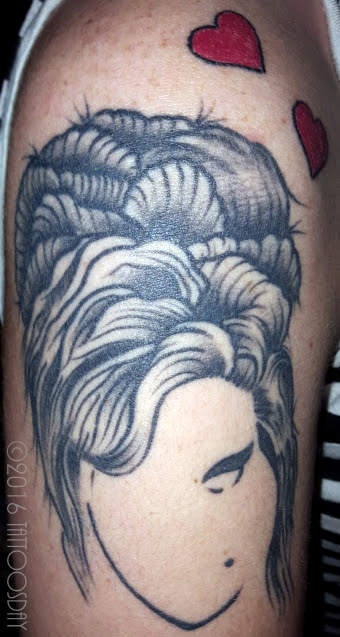 This is, of course, Amy Winehouse.

Paige has nine tattoos, and all of her tattoos, she explained, are rooted in her love of music,

She elaborated on this particular piece, what she calls her "Ode to Amy":


"As someone who lived the blues. her lifestyle constantly overshadowed her musical ability. Since she was widely known by her hairstyle I wanted the piece to emphasize her tresses but in a more mysterious way. The most common question I'm asked is, 'when are you going to add the rest of the face?' Seeing as her life was incomplete, it doesn't feel right to 'finish' it. The piece will exist as is, a fragment of what could have been. Recently, I have added the twin hearts to the top. Amy had the same on her shoulder. With the addition of the hearts I feel the piece, in my mind, is finally complete. Amy Winehouse was an undeniable master of her craft. I'm proud of her work and the influence it's had on my generation."

Paige later sent me a photo of the tattoo after it was completed with the hearts, which provides a slightly different perspective of the tattoo on her right shoulder:

The first part of the tattoo (Amy' s Head) was done by Tony Campise (@tattootony_hkt) from Hard Knox Tattoo in Mount Vernon, Ohio. The two hearts were added by Brian Love (@diabloxblanco), at Smoking Tattoos (@smokingtattoosnyc) on St. Mark's in Manhattan.

On a side note, Paige is also the lead singer of The Montrose Five Band (@montrosefive). Here's a small taste of their music:

Thanks to Paige for sharing her tattoo with us here on Tattoosday!


If you are seeing this on another website other than Tattoosday, without attribution, please note that it has been copied without the author's permission and is in violation of copyright laws. Please feel free to visit http://tattoosday.blogspot.com and read our original content. Please let me know if you saw this elsewhere so I contact the webmaster of the offending site and advise them of this violation in their Terms of Use Agreement.
Posted by Tattoosday at 6:30 AM 1 comment: