Last Friday I met Christopher on Penn Plaza. He estimated that he had tattoos numbering in the mid-fifties.

Again, I am sometimes intimidated by folks with a lot of ink, and will usually not trouble them, but not this time.

And, of all those tattoos, Christopher lifted up his shirt to reveal one of his most meaningful pieces: 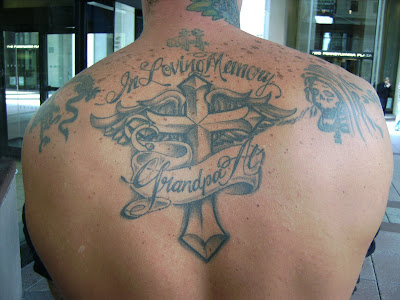 The cross with angel wings behind it is graced by a banner that reads "In Loving Memory ... Grandpa Al". 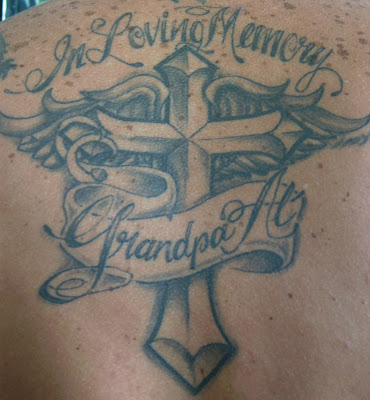 This tribute tattoo was inked at Good Times Tattoo Studio in East Islip, New York by Bill. Christopher is a tattoo artist there as well.

Grandpa Al was a tattoo artist himself, at Ace Tattoo in San Diego, one of the oldest shops in the city (founded around 1947). I acknolwedged that Al must have been busy working in San Diego, with several military bases nearby.

Christopher always knew he wanted to be an artist, and has been tattooing about 14 years.

Christopher shook his head and said he wasn't. "And he doesn't have a single tattoo. Not one!"

He shook his head and laughed "I just don't understand it."

So the ink-lination to tattoo skipped a generation in his family, but you could tell he was proud of his grandfather's legacy, and he bore it like a badge of honor.

Thanks so much to Christopher for sharing his tribute to Grandpa Al here on Tattoosday!
Posted by Tattoosday at 6:03 AM