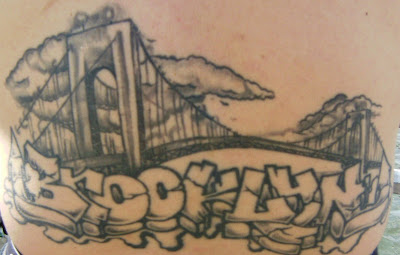 As mentioned in the previous post, I was having some luck spotting some tattoos while riding my bike along the path that runs along the southern tip of Brooklyn.

Last weekend, I was riding north and passed a woman sunbathing in a bikini in the grass along the bike path. I noticed she had some sort of intricate pattern inked on her foot. Yes, I am that committed to Tattoosday that when I see a woman in a bikini, I notice her foot!

However, I chose not to stop and disturb her and kept riding. Yet, the image of her tattooed foot hounded me, and by the time I had reached the 69th Street Pier and grabbed some water at a local store, I had decided to head back a couple of miles and see if she was still there.

Of course, she was gone. I stopped my bike and looked at the spot where she had been and thought of what might have been. I checked the time on my phone and was getting ready to head home when a guy named Danny walked by on the path. He has 12 tattoos. I approached him and we started talking about his ink.

Danny offered up this lower back piece: 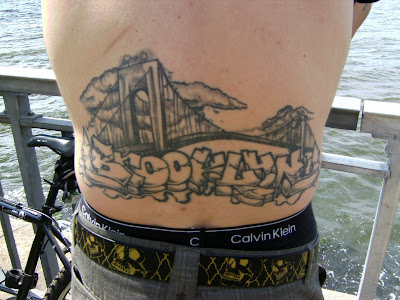 This seemed the most appropriate tattoo to discuss as we were standing under the Verrazano Bridge. This long shot gives a better idea of the appropriateness of the tattoo: 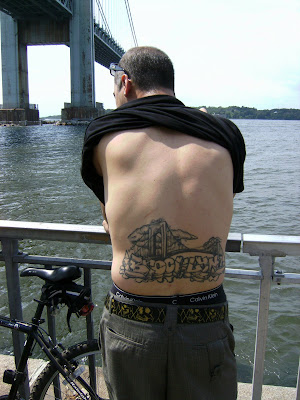 Danny is Brooklyn-born and raised, and a lot of his friends growing up were graffiti artists. This street-style tattoo is true to his upbringing and a key element of his roots in South Brooklyn.

The piece was inked by Mr. Kaves at Brooklyn Ink. Danny explained that Kaves ran Brooklyn Ink before the current owner Joe had the shop (he has work by Joe as well). There's a nice piece about Mr. Kaves in Prick Magazine here.

Kaves is a founding member of The Lordz, a well-known rock-rap band. They were featured in five episodes of a show called "The Brooklyn Way" which aired on FUSE. The show website is here.

As an added bonus, here's a clip of the Lordz, featuring Everlast, performing their song "The Brooklyn Way":

Thanks to Danny for sharing his Brooklyn ink with us here on Tattoosday!
Posted by Tattoosday at 12:27 AM

thankx bill,
i love the pics and piece u did on my tattoo.
thankx for mentioning kaves and the lordz as well
danny