I met Drew in Penn Station and he shared this, one of his two tattoos: 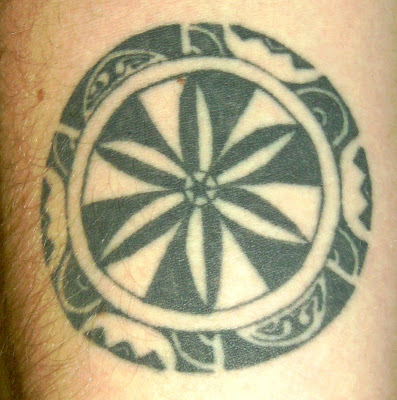 It's a cool design that he saw in an encyclopedia and took to an artist at State of the Art Tattooing in Southampton, New Jersey.

Drew ascribed his own meanings to the piece, creating his own interpretation of the designs.

The main circles he regards as two pinwheels, spinning in different directions. These two, as a whole, represent progression, as life moves forward.

Also, along the edges, in addition to some traditional design aspects, Drew pointed out two half-circles and four quarter-circles. These fragmented wholes represent the realms of dreams and realities.

By ascribing his own meaning and understanding of the tattoo and its elements, Drew makes the impersonal design (out of a book) more personal and special.

Thanks to Drew for sharing his tattoo with us here on Tattoosday!
Posted by Tattoosday at 6:22 AM